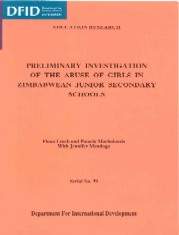 This research uncovered a great deal of sexual and sex-oriented activity in and around the four schools which took part in the study. This activity was transformed all too easily into abusive behaviour by a school culture which tolerated physical as well as sexual violence. In the three co-educational schools, the widespread and illegal use of corporal punishment, aggressive and intimidating behaviour by older boys and sexual advances from male teachers went unchecked and were considered as 'normal'. At the same time, the abuse of girls was part of a broader tolerance of violence in the schools, which also saw younger boys being abused by older boys and widespread bullying of both boys and girls. While the abuse of girls should not be viewed in isolation from other features of school violence, it is important to recognise that girls face additional and unique forms of aggression solely because of their sex.

The gendered pattern of abusive behaviour within the school mirrored that found outside in the wider society, with male domestic violence against women common and sugar daddies preying on young girls as they went to and from school. Poverty made the risk of girls being exposed to sexual exploitation much greater since boys, teachers and adult men used money and gifts as a bribe to coax them into sexual relationships. Given the materialistic culture in which the girls lived, the strong influence of peers and the greater social and economic power wielded by males, girls may not be able to resist continuing demands for sex. Teachers' position of authority in the school would also make it difficult for girls to refuse their sexual advances. Given the very high incidence of HIV infection among this female age group, girls are risking their lives in a very real sense.

The research also revealed a remarkable complacency on the part of teachers and head teachers in dealing with these issues of abuse. There was a general reluctance by head teachers, teachers and male pupils in the mixed schools to acknowledge that male behaviour (and female behaviour in the use of corporal punishment and verbal abuse) towards girls was unacceptable. Because it was considered as 'normal', it was not addressed. Boys are taught from an early age that male control and dominance over females is the norm, while girls are taught to be submissive and dependent on men and to accept male aggression passively. When combined with the girls' ambivalent attitude towards male sexual advances and their limited comprehension at this age of what a sexual relationship entails, abuse in schools flourishes. Far from counteracting this gender socialisation, the school merely reinforces it.

Evidence of a link between the abuse of girls and their under-achievement in school is not clear from this study. What is clear, however, is that the girls were being forced to study in a hostile and insecure environment which denigrated them as female, and where they were unable to concentrate fully on their studies. Attempts to prepare boys and girls for adult life in these schools are failing badly; sex education is poorly taught, teachers fail to take on a counselling role with girls and instead abuse them physically, verbally and sometimes sexually; girls do not discuss problems with their parents, who in turn are all too ready to see them as being at fault and to punish them accordingly.

To address the issue of the abuse of girls in schools, all parties involved in schooling must recognise that the abuse of girls in and around schools is a consequence of the way in which society accords power to men over women. We cannot address the issue effectively unless we also seek to raise the status of women in society, enforce their rights as equal citizens, and ensure that acts of abuse are prosecuted. If action is seen to be taken, and the silence and complacency surrounding abuse is broken, many abusers will stop. One vehicle for addressing issues of abuse is of course formal education. It is imperative that school heads and Ministry officials see it as their responsibility to eradicate abusive behaviour so that girls and boys alike can fulfil their-potential in a safe and secure learning environment.

At the same time as seeking to eliminate the abuse of girls, it is also necessary to investigate and address the abuse of boys, e.g. excessive corporal punishment, verbal abuse, bullying (especially of younger boys by older boys) and possible cases of sexual abuse of boys by teachers, male or female. The bullying of girls by girls was also not addressed by this study and certainly exists; this also needs to be investigated.