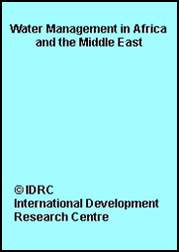 The International Drinking Water and Sanitation Decade (1980-90) had the objectives of providing water and sanitation to rural and urban communities in Africa and involving communities in the management of their water resources. However, some of these objectives have not been met. Barely 45% of the per capita requirements for water are met by the 10-20 L/d available. New approaches to improving access to water have included the following:

· improving the supply of equipment for existing water projects; and

Lakes, rivers, and streams are the main sources of surface water. Because of its accessibility, surface water is more widely exploited than groundwater, especially in the wettest parts of Africa. Except in periods of severe drought, the big rivers of West and Central Africa - the Senegal, the Niger, and their great tributaries, the Chari, the Logone, and the Bandama-discharge millions of cubic metres of water each year. However, this water is not fully exploited by riparian countries.

Groundwater is subsurface water. Aquifers are permeable formations, either consolidated (for example, sandstone) or unconsolidated (for example, sand), that store and transmit groundwater in sufficient quantities to supply wells. Aquifer layers can be continuous, discontinuous, or mixed. Table 1 lists the formations associated with each type of aquifer layer.

Continuous aquifer layers are the most important in many respects: potential, extension, renewal, and discharge rate. These aquifer layers, found in unconsolidated formations, are largely sought to supply water to big urban centres, agriculture, and industry.

The discontinuous aquifer layers are localized and linked to fracturation systems in both arid and semi-arid zones, as well as in humid tropical zones. These aquifer layers are found in crystalline and crystallophyllian formations.

Table 2 shows that Cape Verde and Sao Tome and Principe, which have a small land area, have only one type of aquifer layer. Most of the other countries have the three types. The area of each aquifer type as a proportion of total land area suggests the methodology to be applied for digging water holes and the typology of works to be adopted.

From 1976 to 1982, the Inter-African Committee on Water Studies (Comitnterafricain d’des hydrauliques) published a series of hydrogeological maps at scales from 1: 1 000 000 to 1: 1 500 000. These maps have greatly contributed to knowledge of water resources, especially those in crystalline bedrock. The maps have made it possible to know with precision geological contours, exploitable reserves, conditions of exploitability, and groundwater quality.

Computer-assisted cartography has made it possible to create topical maps at more useful scales. At a scale of 1: 500 000, such maps can present groundwater data meeting three essential specifications: accessibility, or works cost; security, or exploitation cost; and productivity, or exploitation duration.

When surface water, such as a river, is shared by more than one country, conflicts can arise when one of the partner states decides to exploit the common water source by diverting it or erecting a dam. Obviously, a consensus is needed. The Manatali and Diamana dams provide examples of this.

Groundwater, especially the aquifer layers of the big sedimentary basins, always crosses national boundaries. In North Africa, these layers are intensely exploited for agro-industrial purposes. In sub-Saharan Africa, the volumes of water drawn from the great basins are insignificant compared with the existing reserves and replenishment volumes. That is why the exploitation of these groundwaters is less constrained than the exploitation of the big watercourses that often feed these underground reserves.

A common resource must be regulated by legal provisions to facilitate the cohabitation of beneficiaries and ensure its efficient use and its lasting exploitation for the benefit of future generations. These provisions are of two kinds: those regulating national affairs and those regulating interstate affairs. The application of national regulations is a matter of sovereignty and also takes into account national policy objectives. The application of interstate regulations usually requires talks between the partner states and may require these countries to give up a part of their sovereignty. This often makes it difficult to apply interstate regulations.

Studies have indicated the need for rational exploitation and management of water. Whether water is provided free of charge or distributed according to a policy of participation, the potable water supply in urban and rural areas has been inadequate. The economical character of water is no longer in question. It is up to the governing authorities to reverse the trend that gives water supply only a social value and to adopt for rural areas the water-management strategies that work in urban centres. The full responsibility for managing water points should then be entrusted to communities and local operators.