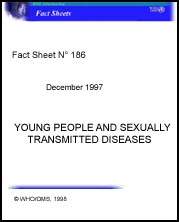 · In the least developed countries, only 13% of the girls and 22% of the boys enroll for secondary education.

· Globally, 5 out of every 10 unemployed are young people; in some developing countries it is 8 out of 10.

· 73 million adolescents between the ages of 10 and 14 are working worldwide.

· For the vast majority, sexual relations begin in adolescence.

· Lack of knowledge and access to contraceptives as well as vulnerability to sexual abuse puts adolescents at highest risk of unwanted pregnancy.

· In developing countries, maternal mortality in girls under 18 is two to five times higher than in women from 18 to 25.

· Adolescent abortions are estimated between 1 and 4.4 million per year, most of which are unsafe because they are performed illegally and under hazardous circumstances by unskilled practitioners.

· Each year more than one out of 20 adolescents contracts a curable STD, not including viral infections.

· There is evidence that new HIV infections in the younger age groups continue to rise as the overall proportion of people living with HIV/AIDS falls.

· Globally, more than half of all new HIV infections are among the 15 - 24 age group.

· In most parts of the world, the majority of new infections are in young people between the ages of 15 and 24, sometimes younger. In one study in Zambia, over 12% of the 15 and 16 year-olds seen at antenatal clinics were already infected with HIV.

· Girls appear to be especially vulnerable to infection. Although statistics from Uganda show that, in some areas, infection rates among teenage girls have dropped 50% from 1990, incidence rates are still six times higher than in boys of the same age.

· In South Africa, the proportion of pregnant 15 to 19 year-olds infected with HIV rose to 13% in 1996 from around half that level just two years ago. In Botswana, the infection rate stood at 28% for the same group in 1997.

· Young people may know of the risks of unprotected sex but feel AIDS could not possibly happen to them. In Malawi, most young men and women know how AIDS is transmitted and how it can be prevented. However, many feel invulnerable to the virus. Some 90% of teenage boys said they were at no risk or at minimal risk of infection, even though nearly half of them reported at least one casual sex partner over the last year, and condom use was low.

· Experimentation is a normal part of adolescent development which also exposes them to health risks. Young people's sexual relations are often unplanned, sporadic and, sometimes, the result of pressure or force.

· Sexual relations typically occur before adolescents have gained experience and skills in self-protection, before they have acquired adequate information about STDs, and before they can get access to health services and supplies (such as condoms).

· Chlamydia infection during adolescence is more likely to result in pelvic inflammatory disease and as a consequence, lead to infertility.

· Exposure to infection such as chlamydia during adolescence is more likely to result in cancer of the cervix.

· Stigma and embarrassment associated with STD can impair psychological development and attitudes towards sexuality later in life.

· The diagnosis of STD infection is more problematic during adolescence: the STD may be asymptomatic, especially in young women; even if adolescents know about existing services, they are often reluctant to seek help for diagnosis and treatment.

Adolescents often have difficulty complying with treatment because it may be lengthy (such as in the case of chlamydia), painful (venereal warts) and sometimes they need to conceal medication so that the STD is not revealed to others.

· Of the estimated 333 million new STDs that occur in the world every year, at least 111 million occur in young people under 25 years of age.

· Sexually transmitted diseases (STDs) are among the most common causes of illness in the world and have far-reaching health, social and economic consequences. In addition to their sheer magnitude, STDs are a major public health problem for two additional reasons: serious complications, and the fact they facilitate transmission of HIV.

· Syphilis was first described in the 16th century. In industrialized countries, syphilis apparently declined during the latter half of the 19th century. In these same countries, however, there was a sharp rise in incidence after the First World War, but following the Second World War the incidence again fell rapidly, coinciding with the availability of improved diagnostic tests and antibiotics. In some developed countries (France, USA), syphilis began to rise again in the 1960s and has been increasing steadily in some industrialized and developing countries since then.

· Syphilis is the classic example of an STD which can be successfully controlled by public health measures: a simple to use and highly sensitive diagnostic test is available, as is a highly effective antibiotic to which resistance has not developed. If untreated, however, syphilis may lead to nerve damage, arterial wall damage, and mental disorientation, and eventually to death.

· It is generally observed that the incidence of syphilis, as reported by the number of cases treated each year, is highest among the 15 to 30 years-old group and among people with the greatest sexual activity, and that incidence decreases with age. Based on reports of new cases of syphilis treated in Chile in 1993, for example, the highest incidence was among the 20-24 age group, followed by the 25-29 age group. The 15 to 24 years-old group represented 40% of all cases.

· In 1995, it was estimated that there were approximately 12 million new cases of syphilis among adults worldwide, with the greatest number of cases occurring in South and South-East Asia, followed by sub-Saharan Africa.

· Gonorrhoea is a common adult disease, though a significant proportion of those with infection (up to 80% among women and 10% among men) are asymptomatic, that is, they do not have symptoms and therefore they are neither aware of the need for treatment nor of the risk of transmitting the disease to others.

· In 1995, it was estimated that there were approximately 62 million new cases of gonorrhoea among adults worldwide, with the greatest number found in South and South-East Asia, followed by sub-Saharan Africa.

· If untreated, the disease could lead to blindness and infertility.

· Epidemiological research in Western and Central Africa revealed an infertility belt. Up to 45% of women over the age of 45 years have been unable to conceive in that area, due in large part to STD-induced infertility among young women.

· Chlamydial infection, like gonorrhoea, is a common adult disease which has asymptomatic rates in women similar to those for gonorrhoea, but higher rates of asymptomatic infection for men. Like gonorrhoea, chlamydia can lead to pelvic inflammatory disease and infertility. Diagnosis of chlamydia infection is costly and it is not generally available in laboratories in developing countries. Even in industrialized countries, laboratory testing is not universally available. Since many infections are neither detected nor treated, prevalence rates are high.

· It was estimated in 1995 that 89 million new adult chlamydia infections occurred in the world with the greatest numbers in South and South-East Asia, followed by sub-Saharan Africa.

· Recently developed laboratory tests have, however, made screening programmes for chlamydia infection possible in some industrialized countries. Rates of infection among women attending family planning clinics from 1989 to 1993 in the United States of America, for example, have been shown to vary from 4.5% to 8.5%.

· Trichomoniasis is one of the most common STDs. It causes symptoms in approximately 50% of infected women. In men, infection is usually of short duration but men easily transmit the parasite responsible for the disease to their partners.

· Studies in Malawi and in former Zaire have shown association of the disease with HIV seroconversion in women. These findings, along with high prevalence of the disease worldwide, call for greater attention to this medical condition, for which diagnosis is simple and treatment is effective.

· Prevalence rates among African women attending antenatal clinics range from 12% in Kenya to 47% in Botswana.

· Approximately 170 million new cases of trichomoniasis were estimated to occur in the world in 1995.

· No estimates of chancroid were made using the methodology developed for other STDs. Poor understanding of the epidemiology and natural history of the disease and the absence of a good test make it difficult to estimate prevalence and duration of infection.

· The genital ulcers produced by chancroid are a major risk factor for HIV transmission, and the incidence of chancroid varies greatly between countries and regions. For example, in Swaziland and Kenya, 44% and 62% respectively of genital ulcers were diagnosed as chancroid in STD clinics in 1980. In western Algeria, chancroid is the most common STD observed and the primary cause of genital ulcer disease. In India, in 1989, chancroid represented 26% of all reported STDs. In most industrialized countries chancroid has become a rare disease.