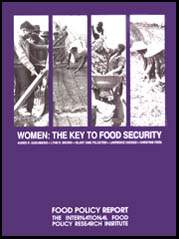 The second pillar of food security is economic access to available food. A household’s access to food depends greatly on its real income. In recent years, a growing number of studies have shown that improvements in household welfare depend not only on the level of household income, but also on who earns that income. These studies find that women, relative to men, tend to spend their income disproportionately on food for the family. Moreover, women’s incomes are more strongly associated with improvements in children’s health and nutritional status than are men’s incomes.

Women’s decisions to engage in income-earning activities involve complex trade-offs, and the ultimate effects of women’s employment on household nutrition security depend on the specific setting. Sufficient evidence supports the argument that women’s employment, especially for low-income households, may be good not only for women’s own welfare, but also for the rest of the household members.24 Most of this evidence pertains to the positive effects that women’s incomes have on household food security and nutrition.

A number of studies conducted during the 1980s suggest that men and women spend income under their control in systematically different ways.25 Women typically spend a high proportion of their income on food and health care for children, as well as other goods for general household consumption. In contrast, men retain discretionary control over a higher proportion of their own incomes for personal expenditures. The findings of these studies were subsequently confirmed by more recent studies that provide quantitative measures of the different effects of men’s and women’s income (Box 6).

Evidence from Africa, Asia, and Latin America shows that women’s income has a greater effect on household food security and preschooler nutrition than men’s income (Table 4). In southwestern Kenya, for a given household income level, female-controlled income share had a positive and significant effect on household calorie consumption, while men’s income had a negative effect.26 A study using Taiwanese data finds that, after holding per capita household income constant, women’s income share has a significant and positive effect on household budget shares of staples and education and a negative effect on budget shares allocated to alcohol and cigarettes.27 In Guatemala, the average yearly profits from nontraditional agricultural export crops would increase household food expenditures by twice as much if they were controlled by women rather than their husbands.28 Finally, one of the most careful studies ever conducted on the welfare effects of male and female incomes shows that the positive effect on the probability that a child will survive in urban Brazil is almost 20 times greater when certain income sources accrue to women rather than men.29

Why do men and women tend to spend income differently? Societal and cultural norms may assign women the role of “gatekeepers,” in which they ensure that household members, especially children, receive an adequate share of available food. Alternatively, women may prefer to spend more on children’s daily needs because they spend more time with them. Women may also face different constraints than do men. To minimize the competing demands on their time, for example, women may spend more on food because they purchase more expensive calories that take less time to prepare. Finally, women and men may have different income flows and thus different transaction costs. In other words, since women’s income tends to come more frequently and in smaller amounts, it may be more readily spent on household daily subsistence needs than lumpier seasonal income, which tends to come to men and is likely to be spent on more expensive items.30 A recent study tested this hypothesis by controlling for the flows of incomes earned by men and women in Niger.31 The findings indicate that the timing of female income flows has a significant effect on both total household expenditures and food expenditures in a given season, while the timing of male income flows has no effect. This suggests that women have less access than men do to resources that tend to even out consumption, such as credit and savings. Thus, both the timing of overall household income and the flow of income by gender influence seasonal food expenditures.

Since income is a critical determinant of a household’s ability to obtain food, poverty is a major threat to household food security. The combination of poverty and gender inequality poses an even greater threat because of the positive nutritional outcomes associated with increasing women’s incomes and the empirical finding that inequality within households tends to decline as households become better off.

A careful review of past studies finds that women are slightly overrepresented in poor households. New evidence from 11 data sets in 10 countries shows that there are more women than men as a proportion of adults in the lowest income group, but this is significantly different from the highest income group only in countries with extreme gender biases.32

Given the positive nutritional outcomes associated with increasing women’s incomes, the growing percentage of female-headed households around the world is a cause for concern, for past studies suggest an association between female headship and poverty.33 Closer analysis of poverty measures of individuals in male-headed and female-headed households in rural Ghana and Bangladesh shows that there are significantly more persons in female-headed households below the poverty line.34 Poor access to education and other resources that tend to raise income levels thus has serious implications for the growing number of women who are the sole income-earners for their families.

One key dimension of poverty that analyses using total expenditures or income often fail to adequately take into account is time.

When time spent on home production (such as child care and fetching wood and water) is included in the computation of full household income, women contribute between 40 and 60 percent of household income.35 Any efforts to increase women’s cash income must take into account the conflicting demands from domestic responsibilities and the need for women to maintain their own nutritional status.