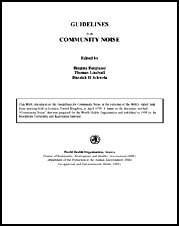 Noise has always been an important environmental problem for man. In ancient Rome, rules existed as to the noise emitted from the ironed wheels of wagons which battered the stones on the pavement, causing disruption of sleep and annoyance to the Romans. In Medieval Europe, horse carriages and horse back riding were not allowed during night time in certain cities to ensure a peaceful sleep for the inhabitants. However, the noise problems of the past are incomparable with those of modern society. An immense number of cars regularly cross our cities and the countryside. There are heavily laden lorries with diesel engines, badly silenced both for engine and exhaust noise, in cities and on highways day and night. Aircraft and trains add to the environmental noise scenario. In industry, machinery emits high noise levels and amusement centres and pleasure vehicles distract leisure time relaxation.

In comparison to other pollutants, the control of environmental noise has been hampered by insufficient knowledge of its effects on humans and of dose-response relationships as well as a lack of defined criteria. While it has been suggested that noise pollution is primarily a “luxury” problem for developed countries, one cannot ignore that the exposure is often higher in developing countries, due to bad planning and poor construction of buildings. The effects of the noise are just as widespread and the long term consequences for health are the same. In this perspective, practical action to limit and control the exposure to environmental noise are essential. Such action must be based upon proper scientific evaluation of available data on effects, and particularly dose-response relationships. The basis for this is the process of risk assessment and risk management.

The extent of the noise problem is large. In the European Union countries about 40% of the population are exposed to road traffic noise with an equivalent sound pressure level exceeding 55 dB(A) daytime and 20% are exposed to levels exceeding 65 dB(A). Taking all exposure to transportation noise together about half of the European Union citizens are estimated to live in zones which do not ensure acoustical comfort to residents. More than 30% are exposed at night to equivalent sound pressure levels exceeding 55 dB(A) which are disturbing to sleep. The noise pollution problem is also severe in cities of developing countries and caused mainly by traffic. Data collected alongside densely travelled roads were found to have equivalent sound pressure levels for 24 hours of 75 to 80 dB(A).

The scope of WHO’s effort to derive guidelines for community noise is to consolidate actual scientific knowledge on the health impacts of community noise and to provide guidance to environmental health authorities and professional trying to protect people from the harmful effects of noise in non-industrial environments. Guidance on the health effects of noise exposure of the population has already been given in an early publication of the series of Environmental Health Criteria. The health risk to humans from exposure to environmental noise was evaluated and guidelines values derived. The issue of noise control and health protection was briefly addressed.

At a WHO/EURO Task Force Meeting in Dorf, Germany, in 1992, the health criteria and guideline values were revised and it was agreed upon updated guidelines in consensus. The essentials of the deliberations of the Task Force were published by Stockholm University and Karolinska Institute in 1995. In a recent Expert Task Force Meeting convened in April 1999 in London, United Kingdom, the Guidelines for Community Noise were extended to provide global coverage and applicability, and the issues of noise assessment and control were addressed in more detail. This document is the outcome of the consensus deliberations of the WHO Expert Task Force.