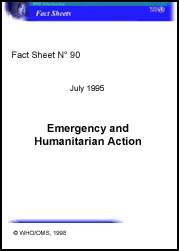 The dramatic and continuing rise in the number and severity of natural and man-made disasters calls for a strengthened and more proactive WHO role in helping to mitigate their impact. It is estimated that in 1994, as many as 250 to 300 million people were affected by such disasters.

In any disaster, human health is invariably at risk. WHO, through its existing technical and managerial expertise in health care and development, is ideally placed to analyze needs in the health sector in crisis situations and thus to cooperate with governments and international agencies in the handling of health issues in emergencies.

In this context, WHO’s vast technical network is utilized to provide expert advice to Member States on, among other things: epidemiological surveillance, control of communicable diseases, public health information and health emergency training.

The Division’s emergency relief activities include the strengthening and provision of emergency drugs and supplies, fielding of technical emergency assessment missions and technical support.

Its emergency preparedness activities include coordination, policy-making and planning, awareness-building, technical advice, training, publication of standards and guidelines, and research on emergency preparedness issues. The Division’s main objective is to strengthen the national capacity of Member States to reduce the adverse health consequences of emergencies and disasters.

WHO is developing a new strategy to increase further the effectiveness of its operations in emergency and humanitarian action. This will mean a more focused application of WHO’s normative functions in the emergency health field, the optimal use of its resources, and the enhancement of practical cooperative links with WHO collaborating centres, other organizations of the UN system, nongovernmental organizations and other “partners”.

In 1994, WHO was involved in emergency and humanitarian action in about 30 countries, ranging alphabetically from Afghanistan to Zaire. The following are some brief examples of WHO’s work.

AFGHANISTAN: WHO helped organize campaigns against cholera and other diarrhoeal diseases, malaria, tuberculosis and acute respiratory infections. It was instrumental in helping obtain a ceasefire between warring factions in order to organize an intensive one-week immunization campaign in November 1994, during which almost one million children were vaccinated against poliomyelitis. Also, almost 350,000 children were vaccinated against measles, and 320,000 women of childbearing age received anti-tetanus vaccination. A second similar immunization campaign was organized from 29 April to 4 May 1995.

ETHIOPIA: WHO participated in the control of malaria and tuberculosis epidemics by providing essential drugs and medical supplies. This was due to collaboration with the United Nations Department of Humanitarian Affairs and a donation from the Government of the Netherlands. In collaboration with the Ethiopian Ministry of Health, WHO completed a US$ 2.5 million project, also funded by the Netherlands, which rehabilitated two hospitals, four health centres and 41 health stations damaged during the civil war.

FORMER YUGOSLAVIA: Under the overall coordination mandate of the United Nations High Commissioner for Refugees (UNHCR) for humanitarian assistance and support, WHO is the “lead agency” for all health-related matters in the former Yugoslavia. With the help of over 80 international and local staff, WHO is assessing health needs, advising health authorities, providing medical and other supplies and helping the physical and psychosocial rehabilitation of war victims.

RWANDA: WHO joined in international relief efforts in 1994 to bring assistance to Rwandan refugees as well as to displaced populations within Rwanda. As a consequence of the mass exodus from Rwanda WHO deployed teams of epidemiologists, primarily along the Zairian border. WHO identified the precise strain of cholera and other pathogens that had been decimating the refugee population; and in the refugee camps at Goma, Zaire, helped to bring rapidly under control epidemics of cholera, dysentery and meningitis.

SOMALIA: WHO has been involved in emergency relief operations in Somalia since January 1992. In collaboration with Pharmaciens sans Frontis, it has established the Somali central warehouse in Mogadishu, which has provided over 80% of medical and surgical supplies and equipment utilized by the national health services and nongovernmental organizations. WHO has set up and maintains an epidemiological surveillance system, which operates through a network of nongovernmental organizations, to monitor communicable diseases, such as acute respiratory infections, tuberculosis and malaria. In 1994, WHO played a key role in containing the spread of cholera outbreaks in parts of Somalia.

ARMENIA, AZERBAIJAN AND GEORGIA: WHO is assisting local authorities in implementing cost-effective strategies in an effort to combat communicable diseases, develop national drug policies, establish health information systems and epidemiological surveillance systems. Tuberculosis control programmes have been initiated in all three countries, as well as joint WHO/UNICEF/IFRC projects to control acute respiratory infections and diarrhoeal diseases. Training is an essential element in each of the projects, and emphasis has been placed on normative and technical guidance functions with long-term benefits.

ZAIRE: During the last four months of 1994, in relation to the crisis involving Rwandan refugees in Goma and Bukavu, Zaire, WHO provided technical advice to the United Nations Children’s Fund (UNICEF) in strategies for immunization; and supported the United Nations High Commissioner for Refugees (UNHCR) in medical coordination of the control of tuberculosis, AIDS, diarrhoeal diseases and acute respiratory infections. It also extended its regional epidemiological surveillance system to these two camps and adjacent areas.