This quotation from the study entitled AIDS in the World, published in 1992 by the Global AIDS Policy Coalition based at Harvard University, USA, says it all. The prime task of this book is to show that in one developing country at least, Uganda, the goal of safe blood has been achieved, and that it can be done elsewhere, using similar methods and drawing on the lessons learnt in Uganda. The days of saying fatalistically 'it can't be done' are over. Uganda demonstrates that the goal of an uncontaminated supply of blood to hospitals, once set, can be achieved.

As elsewhere, it was the HIV epidemic that pointed up the need for a safe, or safer, blood supply. But safe blood has far wider uses than control of HIV. It is, or should be, an integral part of a nation's total health care system, helping to save lives under threat from any direction. So the principles and lessons drawn from Uganda are not just about HIV/AIDS, important as that is, but also about the quality of health care generally. For that reason, they are of wide interest to anyone with a responsibility (medical, financial, administrative) for health care and the saving of lives.

The cry for 'safe blood' is a highly emotional one, since the mere idea of contaminated blood strikes at the very heart of a person's sense of good health and well-being. For many people, blood is central to the notion of life itself. In any industrialised country today, if any part of the blood supply is found to have been 'dirty', that is, contaminated by the HIV virus or other infections, there are loud demands for the punishment of those who have allowed dirty blood to get into public use.

Today, thankfully, in almost any industrialised country, if you go into hospital for an operation involving a blood transfusion, you take it for granted that the blood used will be clean blood. You do not even think about it. This relaxed confidence in the blood supply was not achieved without trauma and upheaval, and a cost in human lives. But since about 1985, the blood supply has been, broadly speaking, safe. For example, since that date, only 18 cases of HIV/AIDS caused by blood transfusion have been recorded in the USA. In the developing world, the picture is quite different. Some 5 to 10 per cent of HIV infections (some say, more) are still due to transfusions of HIV-contaminated blood, and all too often, in poor countries strapped for cash and with tiny health budgets, these statistics are dismissed with a shrug as an unavoidable fact of life (or death). But they show, as clearly as any other measurement of health, the continuing gap between richer and poorer nations.

The vast majority of all blood donations - about 90 million a year - are made in and for the industrialised countries but virtually all the untested blood donations are given in poorer countries.

The most serious characteristic of HIV infection by blood transfusion is that it is almost 100 per cent effective in each case. It can be considered a condemnation to death against which there is no appeal. By contrast, in developing countries, sexual intercourse may cause many more HIV infections overall: but as a transmitter of HIV each act of sexual intercourse has an efficiency of one per cent or less. This is the paradox. Sex causes far more HIV infections than transfusions of contaminated blood, but each individual sex act is at least a gamble: contaminated blood transfusions cause fewer HIV infections, but each transfusion with infected blood almost certainly leads to death.

So the safety of the blood supply is a clear responsibility for governments and public health services, in developing as well as developed countries. Furthermore, if the supply of blood is unsafe, doctors are faced with a cruel ethical dilemma, whether or not to give blood that might save a life - or might kill. It also creates a high risk for individual patients who are in need of blood or blood products, at a time when they are in no position to make a choice or protect themselves or their families. The choice of whether to transfuse blood or not, lies with the doctor. Thus the medical profession cannot duck the responsibility. 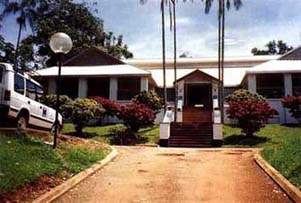 But this is only one of the many difficult decisions and choices to be made when planning a health system in a country like Uganda. In a place where the majority of people do not have access to safe water, where life expectancy is low and infant mortality is high, and where health expenditure is small, what is the justification for making safe blood a priority intervention in the health sector? The answer is this. Because the intervention has a proven effect, on health in general and on disease control, at a given cost, and is feasible, it is a typical public health responsibility. If a proper blood transfusion service is not organised, blood transfusions are given anyway, but badly, and can do more harm than good. Of all the routes of HIV infection, transfusion of infected blood is at the same time the most efficient, and the most amenable to prevention by known technologies and systems.

On systems, Uganda is now in the middle of a large-scale reform of its health sector, to decentralise it, organise it better, and make is more cost-effective. This puts more emphasis on the primary role of health centres and the district. But some services, such as the policy making and organisation of both blood supplies and drug supplies, benefit from being coordinated and monitored at a more central level, for reasons of efficiency and scale. The health reform movement in developing countries is only gradually taking these points into account, and can benefit from well-documented exercises such as the Uganda safe blood programme so as to make better informed choices about essential health interventions.