The evidence for 'a glimmer of hope'

Two studies issued in 1995 offer what one of them calls 'a glimmer of hope' that the rate of HIV may at last be stabilising or even decreasing in Uganda, although Ministry of Health officials are cautious about placing too much weight on this evidence, too soon. 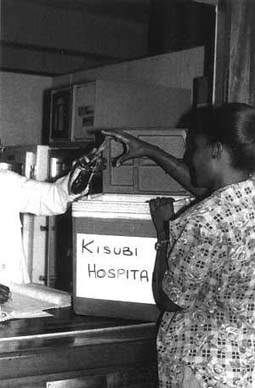 Packing blood bags in a coolbox for distribution

In the first study, a group of scientists headed by epidemiologist Daan Mulder and funded by the UK's Medical Research Council have been studying rates of HIV infection among adults in a group of 15 rural villages, all near to each other, in the Masaka district of south-west Uganda. Most of these adults are peasants who grow bananas as a subsistence crop and coffee for sale. Most are Roman Catholics, but one in four are Muslims. The study has been going on since 1990. The key finding in 1995 was that:

What is the significance of this? The study suggests that: 'This is the first report of a decline in HIV-1 seroprevalence among young adults in a general population in sub-Saharan Africa. The prevalence of HIV infection in this population was high and the intensity of intervention modest. It is too early to conclude that the epidemic in this population is in decline, but the results of this study give a glimmer of hope and should encourage the vigorous pursuit of AIDS control.'

In the second study, the HIV/AIDS Surveillance Report issued by the Ministry of Health in March 1995, it says that sentinel surveys carried out in up to 20 sites in Uganda 'appear to suggest a stabilisation in the prevalence rates of HIV infection, though the rates are still high.'

The data were first reported in 1994, but were re-examined at six sites to make sure that the results were valid. These results, with the significant downward curve setting in from 1993 onwards.

It is a fair assumption that the Uganda Blood Transfusion Service has played its part in this apparent stabilisation (or better than stabilisation) of the HIV rate in Uganda, as its director, Dr Peter Kataaha, and as is also indicated by recent estimates about the numbers of new HIV infections in Uganda prevented by various means.