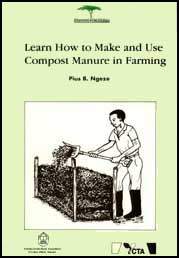 Soil acts as a store for plant nutrients. Plants use their roots to absorb nutrients as well as water from the soil.

(i) Living things, which consist of bacteria, plant roots, insects, etc., and

(ii) Non-living things, which include gravel, sand, remains of plants, animals and insects, as well as humus, among others.

The following are the important uses of soil.

Through the process of weathering, rocks split and get crushed, giving rise to soil. This process, which is still in progress, is necessitated by the following factors.

(a) Variations in temperature

During the day when there is a lot of heat, the rocks expand. At night, it becomes very cold and the rocks rapidly contract. This expansion and rapid contraction of rocks gives rise to the formation of cracks in the rocks. This results in the rocks disintegrating into small particles.

(b) Effects of wind

In most cases, some of the rock particles are blown by the wind. This causes them to rub against each other, thus forming soil particles.

The impact of rain drops causes rocks to gradually wear out and fall off as small particles.

As the water flows, it pushes and carries with it small particles of rock. These collide, giving rise to finer soil particles.

Animals by their movements, cause rocks to collide against each other. So do activities of people. These result in the pieces of rock breaking into finer pellets, eventually becoming soil.

When the pieces of rock described in (a) to (f) mix with air, water, humus and microorganisms, they altogether form soil.

The type of soil depends on the type of the originating rock. There are several types of soil. However, they are, generally, classified into three major types depending on the sizes of their particles.

(i) The particles, being large in size are easily seen by the naked eye.

(ii) It loses fertility very fast. Therefore, in order for the soil to continue being useful, the farmer has to frequently apply fertilizers such as compost manure or cow dung.

(iii) It can not retain much water.

(iv) It has many air spaces.

The crops that may grow on this type of soil are mainly tubers, such as yams, sweet potatoes, coconuts, cassava and groundnuts. Millet, pineapples and cashewnuts may also do well.

This is a common type of soil in most parts of Eastern Africa. It is a mixture of azonal soil and silt. The ratio of the mixture differs from one region to another. Due to this, it may be more of sandy soil in one area but more of clay in another.

Other characteristics of this type of soil are as follows:

(i) Its particles are not easily seen by the naked eye.

(ii) It has adequate fertility.

(iii) It has an average number of air spaces.

(v) It has capacity to retain adequate humidity that is necessary for plant growth.

This type of soil is suitable for growing a variety of crops such as fruits, vegetables, maize, wheat, bananas, coffee, tea and legumes in general.

The main characteristics of this type of soil are as follows:

(i) It has very tiny soil particles which are not discernible to the naked eye. These particles may only be seen through the use of a microscope and are very difficult to separate.

(ii) It is very fertile.

(iii) It does not easily let in air and water because it expands when in contact with water, and the air spaces are very tiny. It also retains water for a long time.

(iv) When watered, it becomes sticky and digging is difficult.

(v) During the rainy season, water settles on the surface for a long time, especially in flat areas.

(vi) When water dries up, or during the dry season, the soil becomes too loose to dig and has many cracks.

(vii) In a forested area, this soil contains more humus than the one found in homesteads.

The crops best suited for this type of soil are sugar-cane, finger millet and rice.

It is important for every farmer to know the type of soil being cultivated as each type of soil has unique characteristics. This calls for different approaches in preparing the soil for different crops. Fertilizer requirements also differ from soil to soil.

Conservation of soil is important. Neglect of the soil may result in its degeneration and may eventually lead to desertification. One way of identifying poor soil conservation is the emergence of soil erosion, which is occasioned by:

This means that erosion is caused by topography, the weather, the absence of land-covering vegetation, characteristics of the soil and earth agitations such as tremors.

There are two ways of conserving the soil:

(a) Replenishing the soil with amounts of fertilizer that exceed those that are extracted by plants from the soil, and especially by an adequate application of natural fertilizers.

(b) Prevention of soil erosion. This helps to keep the soil together so that it is not carried away by either water or wind. Some methods of preventing soil erosion are as follows:

(i) Letting plant left-overs and non-harmful weeds decompose on the farms.

(ii) Preventing the development of water channels on the farms and sealing the existing ones.

(iv) Irrigating the farms in an orderly way.

(vi) Planting trees in areas where there is a high likelihood of soil erosion occurring.

(viii) Avoiding careless burning of vegetation on the farm.

Barren soil is of no use to the farmer. However, soil fertility depends on the effort and ingenuity of the farmer. There are several ways in which the soil can be made fertile. These include periodic cultivation so as to allow some rest to the soil, mixed farming, and application of fertilizers. In the following chapter, a few tips on the use of fertilizers are offered.