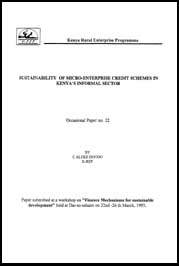 The minimalist group-based approach is derived largely from the model created by the Grameen Bank of Bangladesh. In Kenya the minimalist approach has come to mean running of a credit programme as a business on its own, not integrated with other types of assistance to microenterprises. The approach aims to achieve profitability and to sustain running costs through positive interest rates and a large client base. Sustainability is achieved when the earnings from credit activities enables the programmes to meet running costs of the programme and its expansion in the short to intermediate run.

The impetus for the focus on sustainability has come from NGOs themselves, organizations that are increasingly professional and Kenyan-run and aware of the limitations of reliance on donor funding.

The emergence of the minimalist approach comes after a decade or more of NGO involvement with credit programmes in Kenya responding to the common assumption that access to credit is one of the primary constraints to the development of microenterprises in the informal sector.

In Kenya today there are 114 credit projects and programmes for micro and small scale enterprises, 96 of these are run by NGOs. Attempts by NGOs in the 70's and 80's in delivery of credit to low income entrepreneurs were notably unsuccessful in delivering credit in any volume or in achieving good repayments - certainly unsuccessful by comparison to the successful rural financial institutions in Asia and Latin America.

Of the 6 programmes, three (K-REP, PRIDE and KWFT) were specifically created as credit programmes for microenterprise while the other three (NCCK, Tototo and Chogoria) emerge from earlier welfare oriented projects building on existing experience of people focussed, participatory development of low-income people.

K-REP operates both as an umbrella organization and a funding intermediary, backed by USAID, Overseas Development Administration and Ford Foundation and as a implementing agency through its own Juhudi Credit Programme. Its objective is to strengthen the management of credit organizations and supporting other NGOs in this field to raise their outreach, productivity and performance. Established in 1984, K-REP has been involved in designing, implementing and assisting credit programmes for microenterprise development. K-REP's objective is also to reduce dependency on foreign donors and to raise the sustainability of NGOs in this field.