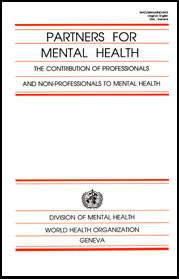 National Association of Psychiatric Survivors - ''Speaking for Ourselves: Former Psychiatric Patients organizing and speaking out''

Over the past twenty years, increasing numbers of former psychiatric patients have become involved in self-help and advocacy activities such as individual and systems advocacy, legislative monitoring, peer support, and the development and operation of user-run alternative services and businesses.

- Challenging (or questioning) the medical model of mental illness;

- Protection and expansion of legal rights;

- Dealing with issues around stigma and discrimination.

Because this is a grassroots movement, the particular conditions that affect people's lives become the chief issues for their groups. It has been remarkable, however, how universal these issues are despite such differences. Newsletters, slogans and campaigns often parallel almost exactly similar efforts from country to country, not because one group has copied from another, but, more usually, because people's experiences as psychiatric patients are remarkably similar.

One issue all groups have confronted is the question of language and terminology. People use a variety of terms to describe themselves: mental patients, psychiatric inmates, clients, service users, psychiatric survivors, and mental health consumers. Although different groups use different terms, or use a variety of terms because no one term is satisfactory to all, this issue illustrates a basic principle - that people are reclaiming language to define themselves and their experiences, and that this reclaiming process is an important part of self-determination. Because the experience of being defined as mentally ill is one of the loss of self-determination, the question of language and terminology takes on particular importance.

In all countries, psychiatric survivors (the term that I prefer, and the one that is used by the US organization, the National Association of Psychiatric Survivors) confront issues of mistreatment, discrimination, poverty, paternalism, and the widespread belief that we are incapable of knowing our own best interests or in advocating for ourselves. Our first task is always the same: to reclaim the right to speak for ourselves, and to combat the internalized oppression that makes us often doubt ourselves and our perceptions. To do this we have had to invent new language and to redefine our experience.

The process of redefinition leads to a new and deeper understanding of our own experiences (what professionals may think of as "symptoms" or "the disease process"). For example, in England and Holland, conferences have been organized by and for people who experience common behavioral manifestations, such as hearing voices or engaging in self-harming behavior (which are termed "symptoms" by psychiatry), at which people have gathered to discuss the meanings that such activities have in the contexts of their lives. There is a profound difference between labelling behavior as a symptom, as psychiatrists do, thus divorcing it from the context and any possible meaning it may have to the individual, and survivors exploring that behavior in the mutually supportive environment of peers.

This exploration leads to the questioning of established psychiatric practices, as people have discovered again and again that recontextualizing and reclaiming their experience clarifies what psychiatry had obscured. Thus, the doubtfulness that many survivors feel about psychiatric diagnoses, neuroleptic drugs and the practice of involuntary commitment grows out of the realization that these practices have been damaging not just personally, but systemically. Indeed, many people who started out believing that their individual experiences were aberrational instances of mistreatment have discovered through consciousness-raising that, instead, they are routine, and that the problem is not preventing the occasional instances of "mistreatment", but in altering the fundamental power relationships that place anyone labelled a "mental patient" at the bottom, not to be believed by virtue of "mental illness".

Because of the universal existence of involuntary commitment, psychiatric patients do not have the choices that medical patients commonly have. A medical patient who finds a particular medication or treatment unhelpful or uncomfortable can simply stop using it, or can seek out another doctor, or a non-medical source of help. A psychiatric patient, on the other hand, usually stands in a different relationship to the treater than does a medical patient. Often the "patient" has not sought treatment, and does not define his/her problems as medical in nature; it is another person (often a relative or friend, sometimes the police or other agent of society) who has decided that the person's behavior is aberrant and indicates the need for psychiatric care. The power of the state can then compel the person to accept treatment, and impose various penalties for attempts to refuse.

It is essential that former patients gain an active role in determining policies and practices if the mental health system is to change in meaningful ways that are responsive to the expressed needs of the people who are receiving services.

Traditionally, mental health policy has been made by mental health professionals (primarily psychiatrists) and governmental representatives. In recent years, the number of interest groups has broadened; family members, particularly, have become influential in public policy debates, and non-psychiatric professionals have also become much more prominent. But it is still difficult for authentic "consumer" voices to be heard - those that are actually receiving services, and not those who claim to speak "for" them, or "in their best interests".

Organizing among present and former patients presents many difficulties. The constituency is largely poor, difficult to reach, and often engrossed in meeting basic survival needs. What is remarkable, given these difficulties, is how much has been accomplished.

In the US, a growing network of self- help services are run without the participation of mental health professionals, and with funding provided by the mental health system. In Europe, particularly, Britain, Holland and the Nordic countries, former patient organizations play a significant role in policy-making, and there are well-organized local and national groups.

The formation, in 1991, of both the European Client Unions' Network at an organizational meeting in Zandfoort Holland, and of the World Federation of Psychiatric Users in Mexico City, shows the determination of these organizations to develop better international communication and to make their voices heard in policy-making, service delivery, and evaluation. Both of these international groups publish newsletters and are attempting to enlarge their constituencies, which is difficult because of extremely limited funding.

However, the need for such organizations is very strong, and the determination of their membership to reach out and to make their influence felt is an indication of Just how deeply former patients want to insure mat our voices are heard and that our concerns are taken seriously.