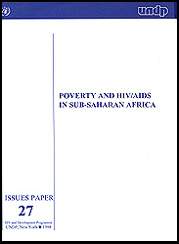 The characteristics of the poor are well known as also are some of the causal factors at work which contribute to a "culture of poverty" - the fact that the children of the poor often become the poor of succeeding generations. Poverty is associated with weak endowments of human and financial resources, such as low levels of education with associated low levels of literacy and few marketable skills, generally poor health status and low labour productivity as a result. An aspect of the poor health status of the poor is the existence amongst many Africans of undiagnosed and untreated STDs which is now recognised as a very significant co-factor in the transmission of HIV. Poor households typically have few if any financial or other assets and are often politically and socially marginalised. These conditions of social exclusion increase the problems of reaching these populations through programmes aimed at changing sexual and other behaviours.

It is not at all surprising in these circumstances that the poor adopt behaviours which expose them to HIV infection. It is not simply that IEC activities are unlikely to reach the poor [which is too often the case] but that such messages are often irrelevant and inoperable given the reality of their lives. Even if the poor understood what they are being urged to do it is rarely the case that they have either the incentive or the resources to adopt the recommended behaviours. Indeed to take the long-view in sexual or other behaviours is antithetical to the condition of being poor. For the poor it is the here and now that matters, and policies and programmes that recommend deferral of gratification will, and do, fall on deaf ears.

Even more fundamental to the condition of poverty is social and political exclusion. So HIV-specific programmes are neglectful of the interests of the poor and are rarely if ever related to their needs, and also unfortunately are other non-HIV related programme activities - such as those relating to agriculture and credit. More generally it is the absence of effective programmes aimed at sustainable livelihoods which limit the possibilities of changing the socio-economic conditions of the poor. But unless the reality of the lives of the poor are changed they will persist with behaviours which expose them to HIV infection (and all the consequences of this for themselves and their families).

Two examples of this state of affairs will perhaps suffice to indicate how poverty leads to outcomes which expose the poor to HIV. Firstly, poverty - especially rural poverty, and the absence of access to sustainable livelihoods, are factors in labour mobility which itself contributes to the conditions in which HIV transmission occurs. Mobile populations, which often consist of large numbers of young men and women, are isolated from traditional cultural and social networks and in the new conditions they will often engage in risky sexual behaviours, with obvious consequences in terms of HIV infection. Secondly, many of the poorest are women who often head the poorest of households in Africa. Inevitably such women will often engage in commercial sexual transactions, sometimes as CSW but more often on an occasional basis, as survival strategies for themselves and their dependents. The effects of these behaviours on HIV infection in women are only too evident, and in part account for the much higher infection rates in young women who are increasingly unable to sustain themselves by other work in either the formal or informal sectors.

There are increasing numbers of children infected with HIV through perinatal transmission (from mother to child). This reflects the large numbers of pregnant women who are HIV positive. Perinatal transmission is largely preventable through appropriate access to drugs (AZT) but these drugs and the necessary infrastructure for their delivery are more or less unattainable for most African women. Limitation of access to AZT is not confined to the poor although they account absolutely for most of the women who have the greatest need.

A related problem is the transmission of HIV through breast milk where there is now clear evidence that significant numbers of babies are infected by this route. This is avoidable and poverty is a clear factor in access to the methods for prevention of transmission to babies through breast milk. To prevent transmission through breast milk requires the ability to buy baby formula and access to clean water, plus an understanding of why these changes in practise are needed. Neither clean water nor the income for purchasing formula are available to the poor, so they are unable because of their poverty to adopt a form of prevention known to be successful as a means of limiting HIV transmission. This problem is resolvable through relatively inexpensive programme activities backed up by community mobilisation to ensure support to families. There are, therefore, no good reasons why action in this area are not being undertaken by governments, NGOs and donors.