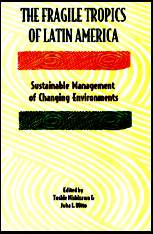 The SFrancisco River, originating in the state of Minas Gerais, is the largest permanent river of North-East Brazil. Enjoying semi-arid tropical conditions and an abundant supply of water all year round, the river's environs have great potential for agricultural development.

The middle SFrancisco Valley, particularly the area around the twin cities of Petrolina and Juiro, attracted national attention during the 1980s, when the region began to change rapidly from traditional sertcovered with caatinga into a productive farming area. The nature of the transformation process, as well as the type of irrigation farming, differs substantially from the spontaneous development exemplified by Boqueirand Teixeira.

The construction of the Sobradinho dam in 1978, some 30 km upstream from the urban settlements of Petrolina and Juiro, was one of the most important factors in transforming the region's economy, society, and landscape (fig. 14.6). There is a hydroelectric power plant with a capacity of 1 million kW. The Sobradinho lake has over 4,000Km of surface areas and a water storage capacity of 34 billion m. The water area is comparable to the Japanese inland sea of Setonaikai. The dam has contributed not only to stabilizing the volume of water flowing downstream but also to providing water for large irrigation projects.

The construction of the Sobradinho dam and the subsequent development of irrigation agriculture brought about a substantial influx of people. In 1940, the municos of Petrolina and Juiro had a combined population of some 30,000. This increased to 124,000 in 1970 and to 222,000 in 1980, reaching 332,000 in 1989. The din and bustle of the urbanized sections of Petrolina and Juiro remind us of the boom towns of the frontier.

Figure 14.6 Irrigation projects in the middle SFrancisco Valley. 1 to 7 correspond to projects in Table 3. (Based on the project plans of CODEVASF, aerial photographs, and field observation.)

The SFrancisco Valley is presently administered by the Development Company of the SFrancisco Valley (Companhia de Desenvolvimento do Vale do SFrancisco, CODEVASF), while the rest of the North-East falls under the jurisdiction of the aforementioned DNOCS. CODEVASF, a public corporation established in 1974 on the basis of SUVALE (Superintendency of the SFrancisco Valley), has five districts with headquarters in Brasilia. The Petrolina-Juiro area belongs to the third district, whose regional office is situated in Petrolina (CODEVASF, 1989).

CODEVASF has promoted regional development by organizing large irrigation projects (table 14.3). In the late 1960s and early 1970s, SUDENE and SUVALE launched the pilot project of Bebedouro in the Petrolina munico, and another pilot project, Mandacaru, in the Juiro municip for the settlement of small farmers. When CODEVASF took over the implementation of such colonization projects, it established the Tourproject in 1976, the Bebedouro II and Mania projects in 1981, the Curaproject in 1982, and the Senador Nilo Coelho project in 1984. These projects offer small parcelas (plots) for small farmers, as well as medium to large parcelas to corporate farms. The emphasis is increasingly on corporate farming, as can be seen particularly in the Tourproject. While Bebedouro and Mandacaru have limited areas under irrigation, CODEVASF's new developments have vast amounts of land under irrigation, including 10,000 ha in Tourand over 4,000 ha each in Manigoba and Cura In the Senador Nilo Coelho project, the largest development in the area, 20,000 ha would be irrigated upon its completion.

Provided that a sufficient amount of water is supplied, the semi-arid tropical environment with ample sunshine promotes rapid plant growth. Agricultural production increased substantially in the 1980s, when tomatoes, melons, cotton, grapes, mangoes, and sugar cane became major crops. In the Juiro munico, the area planted with tomato increased sharply from less than 900 ha in 1984 and 3,800 ha a year later to 4,700 ha in 1988, according to the Brazilian Institute of Geography and Statistics (Instituto Brasileiro de Geografia e Estatist, IBGE). Melons were important throughout the decade, occupying 770 ha in 1988. The area under grapes also increased substantially in the mid-1980s, reaching over 200 ha in 1988. Mangoes, the most recent addition to the list of commercial crops, increased from 20 ha in 1986 to 240 ha in 1987. Although the area under sugar cane was only 1 ha in 1980, over 6,000 ha were recorded in 1988. As these statistics show, development of agriculture in this region took place only during the last decade. Small farms, medium- to large-scale corporate farms, and agroindustries have played their respective roles in this rapid development.

Table 14.3 Irrigation projects of CODEVASF in the middle SFrancisco Valley

Small farmers in irrigation projects are called colonos. They own five to ten hectares of farmland, and cultivate such cash crops as melons, tomatoes, onions, bell peppers, and cotton. Colono farming is typically observed in the Bebedouro and Mandacaru projects, where agricultural cooperatives are effectively organized for cooperative purchase and marketing. The Agricultural Cooperative of Bebedouro (CAMPIB) has 130 members, and that of Mandacaru (CAMPIM) has 50 members.

Japanese farmers, widely known in Brazil as skilled producers of vegetables and fruits, are actively engaged in farming in this area. Although a small number of Japanese farmers started to produce melons in the 1970s, the real development took place in the mid1980s, when the Agricultural Cooperative of Cotia (Cooperative Agrla de Cotia), the largest agricultural cooperative in Brazil, founded by Japanese immigrants in the 1920s, started a colonization project. Obtaining some 1,000 ha from CODEVASF in the Cura project, thirty plots for settlers were prepared. Twenty-nine Japanese families with ample experience and capital from the states of SPaulo and Paranook advantage of this opportunity. After clearing caatinga and preparing fields in 1983, they initially planted tomatoes and melons for immediate returns. As grape vines grew, the colony developed as a centre of grape cultivation. Grapes are shipped to the domestic market as well as to Europe. Beside Cotia's colonization project, many Japanese are independently engaged in farming.

Japanese farmers function as agricultural innovators who experiment with new crops, technology, and marketing. They have contributed a great deal to producing and marketing melons for SPaulo. Double harvesting of grapes and year-round shipment of mangoes became successful due to their experiments. A winery with extensive vineyards is operated by a Japanese resettled from SPaulo. In support of their endeavours, the Agricultural Cooperative of Cotia, as well as the Agricultural Cooperative of South Brazil (Cooperative Agrla Sul Brasil), another Japanese-founded cooperative, opened branch offices in Juiro This region is thus becoming an outpost of Japanese colonization outside of the cultural and agricultural centres in SPaulo and northern Paran

Corporate farms, diverse in size, management, and origin, also play important roles in this region. The Bomprecompany, operating a large supermarket chain in the North-East with headquarters in Recife, operates a 5,000 ha farm of Frutivale in Juiro in and around the Tour o project. The DAN (Desenvolvimento Agrla do Nordeste S.A.) company, financed by the American Express Company and Brazilian investors, is operated by an Israeli firm with advanced technology for arid-land agriculture. An attempt by non-farming investors to make profits in agriculture is well exemplified by the Frutinor company. With headquarters in Salvador, it owns 8,000 ha in three locations. Figure 14.7 shows the land use of a Frutinor farm in the Curaproject. With four centre-pivot irrigation systems, 500 ha are under irrigation, and the fields are rotated for continuous harvest (for details, see Saito et al., 1991).

The Petrolina-Juiro area has also attracted agricultural processing industries, which, in turn, promote farming activities. There are processing plants for tomatoes, cotton, and bell peppers. Wine, sugar, and alcohol are also produced. Some of these agro-industries have headquarters in southeastern Brazil, while others are multinational corporations.

The first enterprise to start agricultural processing was the SFrancisco Valley Winery (Vinicola do Vale do SFrancisco, Fazenda Milano), which initiated wine production in 1974. A decade later the second winery, operated by a Japanese Brazilian, appeared. Both wineries are managed by people resettled from the state of SPaulo.

Probably most important was the establishment of tomato processing plants. The Cicanorte company, established in 1978 in Juiro was the first to start processing tomatoes. It is a subsidiary of Cica headquartered in JundiaSPaulo. Two other major tomato processors, Etti and Costa Pinto, established their factories in Petrolina's industrial district in 1984 and 1988 respectively. The Paulo Coelho group, headed by a local economic and political leader in Petrolina, also started the Frutos do Vale company in 1986. These four tomato processors collect tomatoes by contracting with small farmers as well as large corporate growers. The area under contract amounted to some 15,000 ha in 1989. Tomato cultivation starts in March and the processing continues from June through November. Contracts are well planned in order to secure a stable supply of tomatoes (Saito and Yagasaki, 1991).

The establishment of a sugar and alcohol factory by the Agrovale company in 1980 was very striking. The company owns some 16,000 ha, of which over 7,000 ha are planted to sugar cane. The Usina Mandacaru, located in the centre of the vast cane fields, functions from May through November. Its calendar differs substantially from that of the traditional sugar cane regions of the coastal North-East. Sugar-cane yields amount to some 120 tons per hectare, more than twice than that on the coast, and even higher than that in the canegrowing regions of SPaula. The operation is financed mainly by a civil engineering and construction firm based in Maceio.

There are two multinational corporations operating in this area. One is the Algodeira SMiguel company, started in 1984, a subsidiary of one of the world's largest cotton manufacturers, Coats Viyella, headquartered in Great Britain. Not only does it manage directly 1,200 ha of cotton fields, but it also has 2,500 ha under contract with small farmers. The other is Nisshin Seifun do Brasil. This Japanese firm extracts red dyes from bell peppers to make poultry feed. The product is exported to Japan.