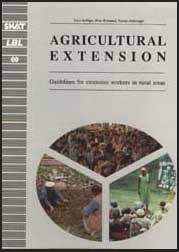 A. Sphere of Influence

When considering difficulties it is worthwhile finding out whether, in the first place, any influence can be exerted on the circumstances in question. The following illustration may help to provide an overview.

B. Our offer: Problem-solving assistance from a distance

2. In which sphere does it lie:

4. Look at the references given to particular sections of the Guidelines. They will lead you to passages that will help you along

The reason is thought to lie with the target population

For those who are interested we should like to mention how we arrived at this collection of difficulties. The "raw material" came from an enquiry that was addressed to former and to still active extension workers. We asked them to name the three most important difficulties they had found in extension work. To their replies we have added the difficulties we ourselves had experienced. Finally, we have compared the whole list with the difficulties found in concrete examples quoted in the relevant literature (reports, GTZ-Handbuch Landwirtschaftliche Beratung).