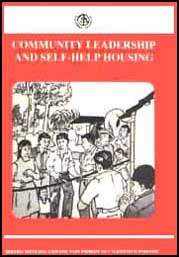 I. Why analyse community leadership

1. The importance of community participation in many rural and urban development schemes is widely accepted by planners and governments alike. Participation is viewed as a fundamental right. It improves the extent to which community-development programmes meet people's needs, and it raises the sense of commitment to both the implementation and on-going use of a project (see references, 1, 40, 68, 83). A key issue is how to encourage community action at different phases of a development project. (95) Belatedly, perhaps, the importance of gender is gradually being acknowledged: women are widely involved in these processes but often in different ways from men. (96) Successful project planning in future will demand greater recognition of the different roles and contributions that women, men and children respectively fulfil within community participation.

2. Community leadership is one important area of decision-making that has been almost entirely neglected. In the academic literature relating to developing countries there is no specific study that examines the various types of community leadership that emerge; the nature of its links to outside bodies and to the community members it represents; the characteristics, motives, skills and legitimacy of individual leaders; and so on. Virtually nothing is known about the relative contribution that different forms of leadership make to the nature of community participation and to successful project development. Interventions in established communities may ignore the structure of leadership that already exists, while in newly-established settlements it is often assumed that active leadership will evolve spontaneously or that it can be mechanistically prescribed as part of the local organizational structure.

3. An adequate understanding of the issue of leadership in decision-making is paramount for several reasons. First, the influence that individual leaders may have in encouraging participation, and in successfully channeling it to the benefit of all members, is an important variable in its own right. As one author remarked more than 10 years ago:

"anyone who does extended fieldwork in squatter settlements or related types of low-income zones in a Latin American city cannot fail to be impressed by the importance of leadership differences in accounting for the developmental trajectories of each settlement. There appear to be strong relationships between leadership performance and differences in the outcomes of demand-making experiences, the length of time needed to accomplish certain developmental objectives, the quality of relationships maintained between a settlement and political and governmental agencies, and the level of internal organization within a settlement over time."

Despite the truth of this statement its implications have largely been ignored.

4. A second reason for eliciting greater awareness of leadership is that it is not a "passive" variable in any development scheme. Where leaders already exist, any external intervention, no matter what its aims, will be perceived by those individuals as a potential threat, regardless of how benign or apparently valuable the assistance being offered. These fears must be recognized and, with sensitive handling, can usually be allayed. In those circumstances where leadership has to emerge in a newly-established community, leadership is conferred upon some individuals but not on others. This may generate jealousies and conflicts that are obstructive rather than conducive to community action.

5. Thirdly, multiple and overlapping leadership often already exists or may emerge. In some cases this is not a problem, but past research and experience suggest that it can lead to divisiveness and conflicts of interest between individuals and their supporters. Competition between rival leaders is as much a stumbling-block to community participation as internal heterogeneity of the community, in terms of tenure, income and so on.

6. A final reason for being aware of the importance of leadership is that insensitive action by an the whole viability and future of a development project. The attitudes of authorities are often patronizing, sexist and unilateral. In addition, apparently simple matters of protocol, such as where to meet leaders, on what terms, and in whose territory, if handled ineptly or if they are not considered carefully, may kill an initiative before it has begun.

Aims of this report and its organization

7. The primary target group for this report consists of professionals working in community development projects in human settlements. The sort of projects envisaged are those of irregular-settlement upgrading programmes, sites-and-services, the extension of primary health-care facilities and so on. This is likely to include professionals such as the project staff of development agencies and non-governmental organizations (NGOs), planners, engineers engaged in the provision of public utilities, doctors and paramedics, as well as a whole host of individuals with an interest in becoming involved in a local community (church people, political parties, academic researchers etc.). In short, it is envisaged that this material will enjoy a wide readership.

8. In addition, field experience in several Latin American countries has been used. The drafters of this document also talked with other researchers who had worked with local leaders, either directly or indirectly, in Africa and Asia and who made comments which have assisted in making genuine cross-cultural comparisons. Unfortunately, given the limitations of space, detailed case studies have not been included. Readers are encouraged to consult original sources where they require more detailed accounts related to a particular region.

9. It is felt that this review has developed sufficiently for meaningful generalizations to be made about the nature, dynamics and impact of community leadership upon urban development schemes that involve self-help, upgrading and settlement improvements. While many of the recommendations about ways of establishing liaison and working with local leaders are tentative and unproved, it is felt that they offer a realistic agenda for future action. Practitioners (both leaders and agency staff) who are at the "sharp end" of these proposals and who have to implement them are asked to provide UNCHS (Habitat) with feedback about their effectiveness, and with information and suggestions about ways in which they ought to be improved. This feed-back can be communicated to the address given at the end of the report.

10. The report contains five substantive chapters. In chapter II the nature of community leadership is described and the characteristics of leaders in different parts of the world are examined, along with their motivations to take on what often appears to be an onerous task with little to commend it. Chapter III analyses the nature of leaders' links to the wider socio-political system and attempts to identify the key determinants of different leadership styles and practices, the reasons for factionalism and for changing patterns of representation. The influence that leadership exercises over community development is examined in chapter IV. Leadership outcomes are evaluated not only in terms of settlement improvements achieved, but also from the point of view of the impact that leaders may have upon socioeconomic inequality, as catalysts for participation, and as so-called "opinion leaders". Finally, chapters V and VI seek to offer advice about some of the major stumbling blocks to successful collaboration and about how those who work with leaders might best overcome such difficulties. Specifically, some of the key points of conflict likely to emerge between leaders and external agents and the rationale underlying those conflicts are identified. Many aspects of project implementation are extremely sensitive and the report shows how different types of agency have responded to the challenge. The "agenda of points" in chapter VI answers many of the practical questions such as how to identify leaders, how to establish contact and work with them, where and how to make a judgement about when to abandon attempts to work within an existing leadership structure and when to create a new one.

11. To repeat: the aims in this report are to raise the level of awareness about the nature and importance of leadership in community development, and to encourage external agencies to be sensitive in the way in which they engage with local leaders and residents. There already exists a local leaders and residents. There already exists a substantial "graveyard" of projects which have failed, or the success of which was seriously impaired, through external agencies paying inadequate attention to the interests and influence of community leaders. It is hoped that this document will give cause and pause for greater thought.