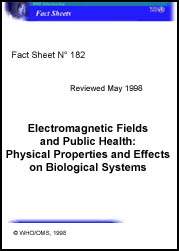 Natural and many human-made sources generate electromagnetic energy in the form of electromagnetic waves. These waves consist of oscillating electric and magnetic fields which interact differently with biological systems such as cells, plants, animals, or human beings. In order to better understand these interactions, it is essential to be familiar with the physical properties of the waves which make up the electromagnetic spectrum.

Electromagnetic waves can be characterized by their wavelength, frequency, or energy. The three parameters are interrelated. Each influences the effect the field may have on a biological system.

How electromagnetic waves affect biological systems is determined partly by the intensity of the field and partly by the amount of energy in each photon.

* Ionizing radiations are extremely high frequency electromagnetic waves (X-rays and gamma rays), which have enough photon energy to produce ionization (create positive and negative electrically charged atoms or parts of molecules) by breaking the atomic bonds that hold molecules in cells together.

* Non-ionizing radiations (NIR) is a general term for that part of the electromagnetic spectrum which has photon energies too weak to break atomic bonds. They include ultraviolet (UV) radiation, visible light, infrared radiation, radiofrequency and microwave fields, extremely low frequency (ELF) fields, as well as static electric and magnetic fields.

* Even high intensity NIR cannot cause ionization in a biological system. NIR, however, have been shown to produce other biological effects, for instance, by heating, altering chemical reactions or inducing electrical currents in tissues and cells.

Electromagnetic waves may produce biological effects which may sometimes, but not always, lead to adverse health effects. It is important to understand the difference between the two:

* A biological effect occurs when exposure to electromagnetic waves causes some noticeable or detectable physiological change in a biological system.

* An adverse health effect occurs when the biological effect is outside the normal range for the body to compensate, and thus leads to some detrimental health condition.

The International EMF Project of the World Health Organization is addressing the health concerns raised about exposure to radiofrequency (RF) and microwave fields, extremely low frequency (ELF) fields, and static electric and magnetic fields. These electromagnetic fields can produce different biological effects that may lead to health consequences.

Radiofrequency (RF) fields are known to produce heating and the induction of electrical currents. Other less established biological effects have also been reported.

* RF fields at frequencies above about 1 MHz primarily cause heating by moving ions and water molecules through the medium in which they exist. Even very low levels of RF energy produce a small amount of heat, but this heat is carried away by the body’s normal thermoregulatory processes without the person noticing it.

* A number of studies at these frequencies suggest that exposure to RF fields too weak to cause heating may have adverse health consequences, including cancer and memory loss. Identifying and encouraging coordinated research into these open questions is one of the major objectives of the International EMF Project.

* RF fields at frequencies below about 1 MHz primarily induce electrical charges and currents which can stimulate cells in tissues such as nerves and muscles. Electrical currents already exist in the body as a normal part of the chemical reactions involved in living. If RF fields induce currents significantly exceeding this background level in the body, there is a possibility of adverse health consequences.

Extremely Low Frequency (ELF) electric and magnetic fields. The primary action in biological systems by these fields is the induction of electrical charges and currents. This mechanism of action is unlikely to explain the health effects, such as cancer in children, reported to occur from exposure to “environmental” levels of ELF fields.

* ELF electric fields exist whenever a charge (voltage) is present, regardless of whether any current is flowing. Almost none of the electric field penetrates into the human body. At very high field strengths they can be perceived by hair movement on the skin. However, some studies suggest that exposure to low levels of these fields is associated with an increased incidence of childhood cancer or other health consequences. Other studies do not. The International EMF Project is recommending that more focused research be conducted to improve health risk assessments.

* ELF magnetic fields exist whenever an electric current is flowing. They easily penetrate the human body without any significant attenuation. Some epidemiological studies have reported associations between ELF fields and cancer, especially in children, but others have not. Research on effects of low-level (environmental) ELF fields is currently underway, including that monitored and encouraged by the International EMF Project.

Static electric and magnetic fields. While the primary action in biological systems by these fields is the induction of electrical charges and currents, other effects have been established to occur that could potentially lead to adverse health consequences, but only at very high field strengths.

Safety Standards: In order to ensure that human exposure to EMF should not have adverse health effects, that man-made EMF generating devices are safe and their use does not electrically interfere with other devices, various international guidelines and standards are adopted. Such standards are developed following reviews of all the scientific literature by groups of scientists who look for evidence of consistently reproduced effects with adverse health consequences. These groups then recommend guidelines for standards for action by the appropriate national and international bodies. A non-governmental organization, formally recognised by WHO in the field of NIR protection, is the International Commission on Non-Ionizing Radiation Protection (ICNIRP). ICNIRP has established international guidelines on human exposure limits for all electromagnetic fields, including ultraviolet (UV) radiation, visible light and infrared radiation, as well as RF fields and microwaves.

Electromagnetic waves are generated by natural, but mostly by human-made sources. Their spectrum includes both ionizing and non-ionizing radiations (NIR).

Ionizing radiations (X-rays and gamma rays) have enough energy to create positive and negative electrically charged atoms or parts of molecules by breaking the atomic bonds that hold molecules in cells together. This effect is called ionization.

Even high intensity NIR cannot cause ionization in the biological system. NIR, however, have been shown to produce other biological effects, for instance, by heating, altering normal chemical reactions or inducing electrical currents in tissues.

Biological effects produced by electromagnetic waves may sometimes, but not always, lead to adverse health effects.