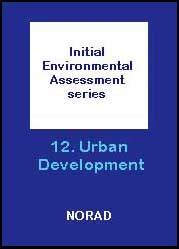 The distinction between rural and urban areas is usually relatively unproblematic and generally related to degree of development. However, among professionals this distinction has been focused for some time, with efforts being made to develop various criteria to distinguish between urban and rural areas. Clearly defined rules and criteria are important in order to observe urban development and its impacts. In industrial countries the most important criteria for classification of areas have been population density, distance between houses, the structure of the economy and population figures. The need for clearly defined criteria became apparent when one started to develop statistical overviews of urban population density and other demographic characteristics. Initially it was only necessary with a consistent definition for each individual country. As the international focus on problems related to urban areas has increased, comparable global statistics have become necessary. However, much of the current statistical data are difficult to compare.

The delimitation of urban areas is defined differently from country to country and can be complex. The differences are usually due to the variations of settlement types, economic structure, tradition etc. in the respective countries. In some countries the delimitation is based on administrative borders. This may generate problems as the cities may in reality expand or contain large unsettled areas within these borders. There are also large variations with regard to the definition of minimum population density for a settlement to be considered urban. Variations of this criteria are related to how densely populated the country is and how many large cities it contains. In most cases the limits are set between 1500 to 5000 inhabitants. The term village is used for communities characterised by a built-up area and a certain degree of communal rights to the utilisation of natural resources.

The global settlement patterns are to an ever increasing degree characterised by urbanisation, defined as those processes which cause an increasing concentration of the population in densely populated areas. This is connected to the increasing specialisation of the economic activity in the secondary and tertiary economies. Urbanisation entails certain fundamental changes that are geographical, physical, structural, economical, demographical, cultural and behavioural. In most industrial countries and some developing countries urbanisation has stabilised. However, most developing countries are in the middle of, or at the start of, an urbanisation process. Many developing countries also experience a considerable population growth, resulting in a rapid expansion of many cities in both Asia, Latin America and Africa the last twenty years.

Planning, administration and management, essential to cope with urbanisation, are often little developed or function poorly in many countries. Weak economy and national debt burdens contribute to this. Most cities in developing countries experience common problems like lack of employment opportunities. too little and often inferior housing, inadequate infrastructure and public services, serious environmental problems, poor health, large social inequalities and poverty. In the future there will probably be more urban poor people than rural poor. Urban environmental problems are due to complex cause-effect chains. In order to identify the correct measures it may be necessary to look closer at the connection between cause and effect. However, a fragmented perspective is often the case and leads to projects and programmes focusing individual extremely visible problems while ignoring other problems and the connections between them.