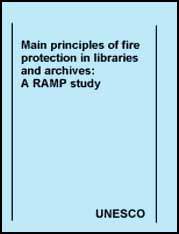 1. Combustibility characteristics of information media in Libraries and Archives

Paper based documents and books make up the bulk of the holdings of libraries and archives. The paper used in documents and books in libraries and archives has been produced at very different times and has therefore, been manufactured using a variety of techniques and ingredients. Paper composed of cotton was used for writing and book printing until the end of the 19th century. Low-grade cellulose paper, such as newsprint, which has a high woodpulp content, was used extensively in more recent years.

Since paper-based documents can ignite from open flames (e.g. from sparks caused by defective electrical wiring, or a carelessly thrown match or cigarette), the chances that the documents will ignite depend on the intensity and duration of the heat released from the source of the flame.

The rate of combustion during a fire depends on the ratio between the combustion-surface area of the books and documents, the volume of the combustibles, how tightly they are shelved, their position in relation to the heat source, etc. Archives use various shelf filing equipment normally with the records either contained simply in file folders or in various styles of open or closed cartons. Typically, rows of records face each other across long service aisles about 762 mm in width. The exposed faces present a wall of paper. Paper has an ignition temperature of approximately 232 degrees Celsius. With open containers or exposed files, the loose ends of the papers or the edge of the file folders can be ignited almost instantly by any source. Because of their mass, closed cartons resist ignition slightly longer.

Cellulose nitrate film is not itself explosive. Its ignition temperature is generally given as about 149 degrees Celsius, but the exact value depends on the duration of exposure, size and purity of film, and other factors. Improperly cared for nitrate film has caused fires after several hours storage at temperatures as low as 49 degrees Celsius. Also, spontaneous ignition is believed to have been responsible for a number of nitrate film fires that have occurred in storage vaults in the summer, following periods of 46 degrees Celsius weather. The rate of combustion of nitrate film is about 15 times that of wood in any form, so that the heat evolved per minute is initially much greater. This results is a rapid temperature increase and a very intense fire. A nitrate film fire burns so fiercely and spreads so quickly that it is virtually impossible to control or extinguish it except by automatic sprinklers.

If cellulose nitrate is ignited and allowed to burn freely in excess air, the gases given off are colourless and are chiefly nitrogen, carbon dioxide, and water vapour, none of which is poisonous or explosive. If, however, the air supply is restricted, as is always the case where the nitrate film is in rolls, the film burns with or without flame, producing copious quantities of thick, yellow smoke. These gases are extremely poisonous and may form explosive mixtures with air. The gases given off by burning nitrate film include nitric oxide, nitrogen dioxide and tetroxide, carbon monoxide, hydrogen, and methane. Traces of hydrogen cyanide have also been detected, but not in significant amounts.

New nitrate film is as stable as it is possible to make it and some nitrate films 30 or 40 years old still appear to be in reasonably good condition. However, all nitrate film deteriorates with age and the deterioration is increased by chemical contamination and improper storage conditions. Nitrate film in an advanced stage of deterioration is less stable, ignites at lower temperatures, and is more likely to ignite spontaneously than new film.

As was stated previously, all nitrate film should be copied on to a safety base film and the original film should be disposed. However, if cellulose nitrate films must be kept for some period of time until they can be copied, they should be carefully examined throughout their length prior to being stored in a vault. Further, they should be re-examined periodically. For moderate storage temperatures and where both temperature and humidity are controlled, inspections should be made at least once annually. Where conditions are not controlled, examinations should be made every six months. In tropical climates, inspections should occur every two to three months.

Motion pictures recorded on triacetate film, on diacetate film or on polyethylene terephtalate film provide a more stable and safe film base. Each of these film bases meet the requirements of international standards on the safety of cine film. The requirements provide that a film is considered safe if it ignites with difficulty (i.e. after being kept for more that 10 minutes at t degrees = 300 ± 3 degrees Celsius), if it burns slowly (a specimen 300 mm long and 0.08 mm thick burning for 45 seconds), and if the nitrogen content of the film case does not exceed 0.36 by weight.

The following table provides information, obtained in the course of tests performed in accordance with standardized international methodology, which may help compare the combustibility properties of different cine films.

Magnetic tape is practically noncombustible. To ignite the polymer materials of which magnetic tape is composed, the tape has to be exposed to a much higher percentage of oxygen than is found in atmospheric air.

Studies of the effects of fire and high temperature on magnetic tape based on polyethylene terephtalate support has shown the results presented in Table 2.

Magnetic and optical discs used to store computer information are manufactured on various support materials (e.g. polymers, aluminum, etc.) which have different inherent properties. When assessing magnetic and optical discs from the standpoint of fire safety, it should be noted that disc manufacturers have certified the upper temperature limit for discs at +65 degrees Celsius. At higher temperatures the physical properties of the medium change, just as the properties of the magnetic layer and the casing change.

As with magnetic tapes which use a polymer support base, magnetic and optical discs do not catch fire at temperatures in excess of 500 degrees Celsius, therefore, they are not dangerous as a fire transfer medium. However, a 100 per cent loss of information takes place in case of fire in a magnetic disc storeroom because of the heat damage to the discs. Therefore, the properties of the information storage media which make them more or less subject to damage from a fire must guide archivists and librarians when determining the level of fire protection required. Magnetic and optical discs should be stored in separate vaults used to store only that specific type of record, and the highest level of fire protection techniques should be used to protect the discs.