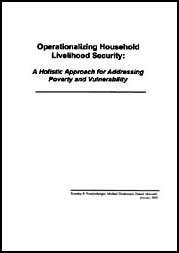 One area which CARE has been seeking to incorporate more successfully into its livelihood framework is that of gender. Experience from some of CARE'S projects in Zambia, which have been using a livelihoods framework since 1995, has shown that working towards achieving greater gender equity in the benefits of programs is an especially difficult challenge. Dealing with the issue at all requires a project to have both a well-developed information system and the ability to engage in internal reflection and learning. In fact, the 'reflective practice' element of the program design framework was added during a workshop with CARE Zambia staff to discuss their experiences with using HLS and gender frameworks, seeing what the major programming issues were with regards to both, and how they could move forward more effectively with a better integrated 'HLS + gender' approach.

Gender equity in CARE programming entails the condition of fairness in relations between men and women, leading to a situation in which each has equal status, rights, levels of responsibility and access to power and resources. Gender is considered different from sex, which describes the universal, biological characteristics of men and women. Gender refers to the socialization process that assigns certain attitudes, roles and responsibilities to men and women, and results in different opportunities and behavior for each. It is dynamic, varying within and between societies, and over time, and is influenced by cultural, economic, political and environmental factors. CARE seeks to ensure that change brought about by programs responds to mutually agreeable standards of fairness of both women and men in their given contexts (Beckwith 2000).

Equity is different from sameness. It is based on the concept of what is just, and the premise that women and men, by virtue of their common humanity, deserve equal opportunities to define their path in life. It does not prescribe a given division of roles, nor does it ignore the fact that success will ultimately rest with the inspiration and efforts of each individual person. CARE'S focus on equity is a recognition that in much of the world today, opportunities are not equal and the playing field is not level (Beckwith 2000).