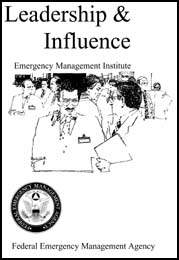 At the conclusion of this unit, you will be able to:

1. Define the term power;
2. Describe the seven primary power bases;
3. Explain the relation of power base of the development leader of followers; and
4. Analyze the utility of the various power bases in different emergency management situations.

Power is the means or resources by which the leader gains compliance of others to achieve goals.

BASE OF POWER IS:

- based on the leader's connections with influential or important people

- based on the leader's possession of expertise, skill, and knowledge

- based on the leader's possession of or access to valuable information

- based on the position held by the leader

- based on the leader's personal traits

- based on the leader's ability to provide rewards for other people

All of us use most of the power bases to varying degrees.

Power is a function of the resources others think you have.

- based on power that goes with the job and is permanent as long as the person holds a given position.

- depends on you and others. Others can make this power meaningless if they perceive you lack the relevant resources.

Which of the power bases are position power?

Which of the power bases are personal power?

Relationship between development level and use of personal or position power:

For a person low on competence & commitment:

For a person high on competence & commitment:

POWER PERCEPTION PROFILE-Perception of SELF

Consider your position in the local emergency management system and guess your power base hierarchy. Identify your strongest and weakest power bases first, labeling them "1" and "7" respectively in the "Perceived Power Bases" column below. Then identify the remaining five.

The Power Perception Profile-Perception of Self questionnaire provides you with 21 pairs of reasons given by people to explain why they do things a leader wants them to do. After scoring the questionnaire, record your actual scores in the "Computed Power Bases" column above then answer the questions on the next page.

· Are there any differences between the perceived and computed power base hierarchies? If so, where and why?

· Are there power bases upon which you can improve and build in your local emergency management system? How?

Influence Plan Update: Return to page II-17 and make some notes on how the person you are trying to influence may be affected by your use of the various power bases.