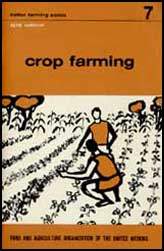 With some soils the surface gets hard after rain; a crust of earth is formed. Water rises in the crust as it rises in lumps of earth {see Booklet No. 4, page 30).

· The earth crust must be broken up to prevent the water rising. This is called hoeing.

· Rain that falls on a well- hoed soil goes in easily. It does not run off the surface. It is not wasted.

· Hoeing is done with a hand hoe or with an animal- drawn cultivator.

Weeding often serves both purposes: it gets rid of weeds and breaks up the soil crust.