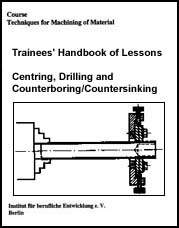 - Combination tools (piloted counterbore, step countersink, combination countersink) can be economically used since several operations are combined into a single one.

- When working with the counterbore/countersink, a relatively low speed rate is to be selected to avoid chatter marks (scratches, grooves).

- During counterboring/countersinking of parts made of steel, cast steel, red brass or light metal, coolants or lubricants are to be used to improve the surface finish.

Chips must never be removed by hand - danger of accidents!