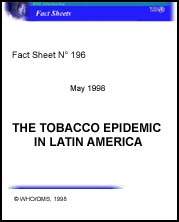 THE TOBACCO EPIDEMIC IN LATIN AMERICA

More Than 400 Latin Americans Are Killed Every Day

At present, there are an estimated 150,000 deaths per year from tobacco in Latin America. The numbers are rising steadily, and in the next quarter-century this toll will almost triple. By 2020, tobacco will be killing around 400,000 people every year. Of particular concern is the projected escalation in the proportion of tobacco-caused deaths occurring among women in the region.

In Latin America, the predominance of non-communicable diseases, already apparent in 1990, will become even more evident over the next few decades. From 1990 to 2020, deaths from chronic diseases are expected to double, by which time they might well account for about three-fourths of all deaths in the region. By 2020, there will be seven times more deaths from non-communicable diseases than infectious diseases, compared to twice as many at present.

Consumption: In the early 1990s, per capita consumption of cigarettes for adults aged 15 and above averaged about 1300 annually. This ranged from around 350 to 450 in countries such as Peru and Guatemala to around 2000 and above in Venezuela and Cuba. Today, an estimated average of 12 cigarettes are smoked per smoker per day in the region

· Predicted increases in consumption are attributed to such factors as improved economic conditions, a rise in disposable income, population growth, and an increase in smoking among women.

· According to WHO estimates, approximately 40% of men and 21% of women in Latin America and the Caribbean smoke. In general, smoking prevalence is highest in urban populations.

· The prevalence of smoking in Latin America is variable, but reaches 50% or more among young people in some urban areas. Significant numbers of women in the region have taken up smoking in recent years.

· Studies conducted in a number of Latin American countries indicate that three-fourths of smokers start smoking between the ages of 14 and 17. There appears to have been an increase in smoking prevalence among teenagers, mostly in urban areas. In contrast, rural populations, particularly indigenous or native populations record relatively low smoking prevalence.

· In Latin America, public awareness of the health risks of tobacco use is generally low, so are the levels of motivation to quit smoking.

Tobacco economics: Tobacco is grown in a number of countries in Latin America

· In the countries where tobacco production and marketing represent an important part of the national economies, this has often lead to a conflict of interest concerning the implementation of effective tobacco control policies and programmes.

· Cigarette smuggling remains a problem for many countries of the region.

Tobacco control measures: They are badly needed in order to reverse the tobacco epidemic in Latin America.

· In some countries children work selling single cigarettes, and are also employed in tobacco cultivation.

· In general, medical professionals are not widely informed about the risks of tobacco. There is also a lack of health promotion programmes. This results in a lack of public knowledge which serves to reinforce a culture where tobacco use is socially acceptable. This makes it difficult for tobacco control programmes to advance.

· The Tobacco Control Coordinating Committee for Latin America (CLACCTA) has been actively involved in moving countries towards the adoption of comprehensive tobacco control polices and programmes.

· An Interagency Action Plan has been developed for Latin America to provide assistance and technical support to the various countries involved in the development and/or strengthening of tobacco control groups at the country level. One goal is to facilitate the establishment of strategic alliances or coalitions which are multisectoral and involve both government and nongovernmental organizations. The plan provides an important framework for implementing and monitoring progress on tobacco control in Latin America.