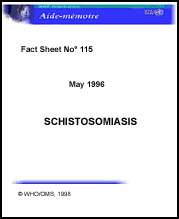 For diagnosing urinary schistosomiasis, a simple sedimentation can be used efficiently. A syringe filtration technique using filter paper, or polycarbonate or nylon filters, allows a 5-person team to examine up to 200 children in 90 minutes. The eggs of intestinal schistosomiasis can be detected in faecal specimens by sedimentation or a technique using cellophane soaked in glycerine, or between glass slides. Children with S. haematobium nearly always have microscopic or visual blood in their urine (haematuria). Children needing treatment can be also be identified by looking at urine specimens or checking for microscopic blood with chemical reagent strips. The cost of tests needing a microscope is US 1 cent or less, and with chemical reagent strips about US 5 cents.

Three safe, effective drugs -- praziquantel, oxamniquine and metrifonate -- are now available for schistosomiasis and are included in the WHO Model List of Essential Drugs.

Praziquantel is effective against all forms of schistosomiasis with few, and only transient, side effects. Cost has decreased to under US 25 cents for adults and even less for children. Oxamniquine is used exclusively in Africa and South America to treat intestinal schistosomiasis. Metrifonate has proved to be safe and effective for the treatment of urinary schistosomiasis. Even though re-infection may occur after treatment, the risk of developing severely diseased organs is diminished and even reversed in young children. In most areas, a reduction in the overall number of cases is maintained for 18-24 months and in other areas for up to five years without further intervention.

Except in Japan, Lebanon, Montserrat and Tunisia, where the disease has disappeared altogether, WHO's control strategy is to reduce the amount of disease caused by schistosomiasis rather than to halt transmission entirely. According to the findings of a WHO Expert Committee published in 1993:

· Controlling morbidity with drug treatment is a feasible and effective strategy. Other major interventions are health education and provision of safe water.

· Approaches differ for controlling the various forms of schistosomiasis and must be adapted according to the epidemiology, resources and culture of each country.

· Schistosomiasis control is a long-term commitment. While short-term objectives to reduce prevalence can be achieved (up to 75% within two years in many endemic areas), surveillance and maintenance must continue for 10-20 years.

For further information, please contact Health Communications and Public Relations, WHO Geneva, Tel (4122) 791 3221 or fax 791 4858; or Dr Lorenzo Savioli, Division of Control of Tropical Diseases/Schistosomiasis and Intestinal Parasites Unit, Tel (4122) 791 2664 or Fax 791 4869. All WHO press releases, fact sheets and features are available on the Internet on the WHO Home Page http: //www.who.ch/