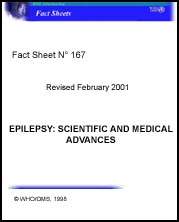 Research into epilepsy falls into two main categories: basic and clinical. However, the vast majority of the technology required to carry out this research and the benefits which accrue from the research are only available in developed countries.

This focuses on the fundamental mechanisms which underlie the development of epilepsy, the cause of spontaneous seizures, their different manifestations, their timing and duration, and the consequences of repeated seizures on brain function. Understanding the cellular (neuronal) and brain processes responsible for individual seizure types and epileptic disorders will lead to new approaches to prevention, treatment and care. The following are key points in this research:

· Recent work has traced specific types of seizures to distinct disturbances in neuronal connections in the brain, and the chemical transmission of information between neurones.

· Neuropharmacologists have subsequently identified or designed compounds which selectively interfere with these abnormal brain functions, leading to the development of new anti-epileptic drugs which are able to treat specific types of epilepsy with less impairment of normal brain function. This is because they are less sedative and have fewer cognitive side-effects.

· In the past few years, there have also been advances in research on the genetic basis of some epileptic syndromes, mainly in childhood and adolescence, with the identification of specific chromosomal linkages which increase the probability that an epileptic disorder will appear, usually in association with other acquired or environmental factors.

· Identification of some of the genes responsible for a predisposition to epilepsy may reveal the basic neurochemical or physiological defects which need to be prevented or corrected. This, in turn, may help scientists to develop new anti-epileptic treatments.

· It is quite possible that research over the next decade on molecular genetics of human epilepsy will result in an entirely new classification of epileptic disorders and a better understanding of the fundamental causes of the many forms of epilepsy.

This research is primarily concerned with the application of new diagnostic technologies and therapeutic interventions. It also includes understanding regional differences in the various types of epilepsy and their cause, studying the provision of health services for people with epilepsy and the cost-effectiveness of treatments. Further research, in the fields of psychology and sociology, and which is not detailed here, has improved the understanding of the impact of the disease on people with epilepsy and enabled the formulation of rehabilitation programmes.

It is only in the last decade that clinical neuroscientists have been able to look directly at the structure and function of the living human brain. This has been through the use of:

· Magnetic resonance imaging (MRI) has enabled the majority of structural brain abnormalities responsible for epileptic seizures to be visualized.

· Magnetic resonance spectroscopy (MRS) is also being used to non-invasively identify areas of brain damage as well as disturbances in brain metabolism and neurotransmitter function.

· Although MEG and MRS remain experimental diagnostic tools, most of these techniques are being used in epilepsy centres in developed countries not only for research but also for evaluation of people who may benefit from brain surgery as treatment for intractable, drug resistant forms of the disease.

· It has recently been shown that early effective treatment with anti-epileptic drugs will control seizures in up to 70% of newly-diagnosed adults and children.

· Attention is now being directed at the most appropriate choice of drug for specific epilepsy syndromes.

· The reasons why some people develop chronic drug-resistant epilepsy is also being investigated.

· For approximately two decades, no new major anti-epileptic medications were introduced. In the last few years, however, five new anti-epileptic drugs have reached the market and several more drugs are currently in the clinical testing stages. In part, this is due to pharmacological application of the better understanding of the basic mechanisms of epilepsy.

The 20 last years, major advance has been the recognition that certain specific epileptic syndromes, which respond poorly to drug treatment, have an excellent chance of successful treatment with surgical intervention.

· Recent advances in diagnostic technology and surgical techniques have led to an increasing use of surgical treatment of epilepsy.

· Pharmacological and surgical therapies are today based on correcting or eliminating specific epileptic disturbances. This not only provides the greatest opportunity for people to be relieved of disabling seizures and the disturbing side-effects of treatment, but it also avoids the long-term psychosocial consequences of living with an uncontrolled epileptic disorder.

· Recent research has found that particular seizures result from particular neuronal activity and new anti-epileptic drugs which can better target these seizures have been developed.

· Molecular genetics may soon shed new light on the fundamental causes of epilepsy.

· New diagnostic tools have been developed to aid clinicians in their identification of types of seizures.

· Anti epileptic drugs which include "old" and new are controlling seizures in almost 75% patients.

· Successful surgery is now an option for many people with epilepsy who previously did not respond to anti-epileptic drug treatment.

· Many of these benefits are unfortunately only felt in more developed countries.