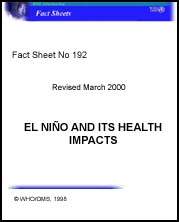 EL NI—O AND ITS HEALTH IMPACTS

Every few years, an unusually warm current flows off the western coast of South America. Its appearance after Christmas lead sailors in Peru to christen it El Nithe Christ-child in Spanish.

Like a child, it is sometimes unpredictable, and sometimes creates havoc. In El Ni case, it brings natural disasters such as storms, floods and droughts and famine in far-flung parts of the world.

The term El Nis nowadays used to refer to the periods of strong and prolonged warm weather, which influence the climate worldwide. The periods of the warm waters in eastern Pacific (El Niand periods of cooler waters (La Niare accompanied by changes of air pressure in the east and west Pacific: these are called the Southern Oscillation. The whole cycle is now referred to as El Niouthern Oscillation (ENSO). The effects of La Nire generally less pronounced and tend to be the opposite of those of El Ni

· The El Nivent begins with the weakening of the prevailing winds in the Pacific and a shift in rainfall patterns.

· The events are associated with extreme weather (floods and drought) in countries surrounding the Pacific and much further afield.

· Prolonged dry periods may occur in South-east Asia, Southern Africa and Northern Australia and heavy rainfall, sometimes with flooding, in Peru and Ecuador.

· During a typical El Nithe Asian monsoon usually weakens and is pushed towards equator, often bringing summer drought to north-west and central regions of India and heavy rainfall in the north-east.

· The regions where El Nias a strong effect on climate are those with the least resources: southern Africa, parts of South America, South-east Asia.

The number of people killed, injured or made homeless by natural disasters is increasing alarmingly. This is partly due to population growth and the concentration of population in high-risk areas like coastal zones and cities. Their vulnerability to extreme weather conditions is also increasing. For example:

· In many areas the only places available to poor communities may be marginal land with few natural defences against weather extremes.

Large year-to-year fluctuations of natural disasters, some of which can be explained by El Niare described as the El Niisaster cycle.

· El Nis associated with death and disease, most of which result from weather-related disasters such as floods and droughts.

· In 1997 Central Ecuador and Peru suffered rainfall more than 10 times normal, which caused flooding, extensive erosion and mudslides with loss of lives, destruction of homes and food supplies.

· In the same year nearly 10% of all health facilities in Peru were damaged.

· The 1991-92 El Nirought the worst drought in southern Africa this century, which affected nearly 100 million people.

· Ecuador, Peru and Bolivia suffered serious malaria epidemics after heavy rainfall in 1983 El NiThe epidemic in Ecuador was badly exacerbated by displacement of population owing to the flooding.

· The most expensive natural disaster ever, Hurricane Andrew, happened during the same 1991-92 El Ni although El Nisually reduces hurricane activity.

· During the 1997 El Niroughts hit Malaysia, Indonesia and Brazil, exacerbating the huge forest fires. Smoke inhalation from these fires was a major public health problem in these countries, with countless people visiting health facilities with respiratory problems.

Recently, there has been growing recognition of the links between El Nind disease. For example, doctors for many years were intrigued by the cycles of malaria in some countries roughly every 5 years. Such cycles in India, Venezuela and Columbia have now been linked to El NiPronounced changes in the incidence of epidemic diseases can occur in parallel with extreme weather conditions associated with the El Niycle.

The El Niycle is associated with increased risks of some of the diseases transmitted by mosquitoes, such as malaria, dengue and Rift Valley fever. Malaria transmission is particularly sensitive to weather conditions. In dry climates, heavy rainfall can create puddles, that provide good breeding conditions for mosquitoes. In very humid climates, droughts may turn rivers into strings of pools, preferred breeding sites of other types of mosquito.

Generalizations about the association between vector-borne disease transmission and El Nire not easy, as local transmission depends on ecology of the local vector species, whose responses to timing and amount of rainfall may differ.

· Malaria is increasing and resurgent in areas where it had formerly been controlled.

On the desert and highland fringes of malarious areas, rainfall, humidity and temperature are critical parameters for disease transmission. In these places malaria transmission is unstable and the population lacks protective immunity. Thus, when weather conditions favour transmission, serious epidemics may occur.

In some highland regions higher temperatures possibly linked to El Niay increase malaria transmission. This has been shown to occur in higher latitude parts of Asia, such as northern Pakistan. At the beginning of this century, periodic epidemics of malaria flared up in Punjab region (north-east Pakistan and north-west India) after excessive monsoon rainfall.

Before the advent of DDT for malaria control, the risk of malaria in Punjab increased five times following an El Ni

From 1921, forecasts of malaria epidemics in that region were based on established relationship between rainfall and malaria mortality, creating probably the first malaria early warning system. Malaria is now controlled in Punjab, but it is still a serious problem in more arid areas in Western Rajasthan and Gujarat in India and Pakistan. There, too, the epidemics are linked to excessive rainfall. However, in some regions, malaria epidemics are linked to below-average rainfall.

· In Venezuela and Colombia, malaria cases increase by more than one third following dry conditions associated with El Ni

· In Sri Lanka, in pre-DDT times, the risk of malaria increased three-fold following the failure of the monsoon which was also associated with El Ni

Dengue is the most important viral tropical disease transmitted by mosquitoes.

The mosquitoes that transmit dengue breed in containers and are less sensitive to rainfall patterns, but higher temperatures associated with El Niay have an effect on the transmission of the virus. The connection between the weather conditions and dengue transmission and outbreaks is not yet clear - even if the weather conditions were favourable for transmission, the local population may be already immune to the prevalent virus.

Preliminary studies have shown a link between the El Niouthern Oscillation and incidence of dengue in countries where the El Niouthern Oscillation has a strong effect on the weather (e.g. some Pacific Island nations and Indonesia). In 1998, many countries in Asia suffered an unusually high level of dengue and dengue haemorrhagic fever, some of which may be attributable to El Nielated extreme weather.

Outbreaks of Australian Encephalitis (Murray Valley Encephalitis - MVE), another mosquito-transmitted disease, occur in temperate south-east Australia after heavy rainfall and flooding associated with La Nivents. There is some evidence that outbreaks of Ross River virus infection are linked with La Nilso, but this is less certain that in the case of MVE. The public health impact of Ross River infection is greater than MVE in terms of number of people affected.

Rift Valley Fever (RVF) is a mosquito transmitted viral disease, which primarily affects cattle, but can spread to the local human population. Outbreaks of human disease in eastern Africa always follow episodes of heavy rain (although in that region, El Nis not always associated with heavy rainfall). A severe outbreak of disease occurred following excessive rainfall in north-eastern Kenya and southern Somalia during the 1997-98 El NiThe rainfall patterns were unusually heavy for El Niresulting in flooding and major outbreaks of malaria and cholera.

A focus of research is centred on the ability to predict El Nivents several months in advance. Seasonal forecasts (also called El Niorecasts) are used to predict major climate trends for anything from several months to a few seasons ahead. A seasonal forecast usually describes the probability of weather factors (temperature, rainfall) being above, near or below the average. Such forecasts are much more reliable during El Nibecause of its strong effect on climate. These forecasts are only experimental at the moment, but their accuracy and reliability is expected to improve in the near future.

Because El Nivents evolve over several months, it is already possible to give advanced warning of many impacts once the onset of an event has been confirmed.

Global warming is one of the most serious threats to our environment. Although we do not know how climate change may affect El Niit has been suggested that the phenomenon may become more intense or more frequent.

A report by a WHO Task Group has warned that climatic change may have important impact on human health. It is likely that the frequency and intensity of weather events around the world will be affected.

WHO is a member of the United Nations Inter-Agency Task Force on El NiThe Task Force aims to develop strategy towards prevention, preparedness and mitigation of El Ninduced disasters. In order to reduce the impact of the next El Nithe United Nations has asked for intergovernmental agencies support in activities of the International Decade for Natural Disaster Reduction and for its successor arrangement, the International Strategy for Disaster Reduction.

Seasonal forecasting is increasingly used to provide early warning of drought. There is a need for collaboration between meteorological and health sectors to produce health early warning systems.

A pilot study on the application of seasonal forecasting to malaria control has been undertaken in the Southern Africa Development Community region. In this study, the national meteorological services, health sector and agriculture sector have joined forces.

WHO has recently launched a new initiative to combat malaria-"Roll Back Malaria". Targeting control efforts to years when there is a high-risk of El Nincreases the cost effectiveness of malaria control; also, the judicious use of insecticides can delay the development of resistance.

All WHO Press Releases, Fact Sheets and Features as well as other information on this subject can be obtained on Internet on the WHO home page http://www.who.int/home/