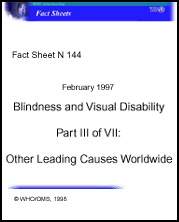 · VITAMIN A DEFICIENCY leads to blindness (xerophthalmia) in some 350 000 children annually. It impairs the immune system, increasing the chances of dying in childhood by about 20%. Also, pregnant and lactating women in some countries with endemic Vitamin A Deficiency exhibit night blindness.

* Animal food and some orange or yellow fruits are good sources of vitamin A, but these are rarely consumed by poor families. Increasing the consumption of green leafy vegetables can also help prevent Vitamin A Deficiency.

* The three main strategies for the elimination of Vitamin A Deficiency include supplementation, food fortification, and dietary change.

* The elimination of Vitamin A Deficiency as a public health problem by the year 2000 is one of the targets of WHO as noted in its Ninth General Programme of Work (1996 - 2001). Collaboration with UNICEF and other international agencies and nongovernmental organizations are essential for achieving this goal.

· ONCHOCERCIASIS, or “river blindness”, accounts for some 270 000 cases of world blindness with almost 99% of these cases in Africa. It is endemic in 30 African and 6 Latin American countries, in which 18 million people living in rural areas are infected. Some 120 million people in these countries are at risk of contracting the disease.

* Onchocerciasis is caused by Onchocerca volvulus, a parasitic worm that lives for up to 14 years in the human body. Each adult female worm produces millions of microfilariae (microscopic larvae) that migrate throughout the body and give rise to a variety of impairments, including serious visual loss and blindness.

* The disease is transmitted by the blackfly when it takes its bloodmeal from an infected person and carries microfilariae to another. The blackfly lays its eggs in the water of fast-flowing rivers. Adults emerge after 8-12 days and live for up to four weeks, during which they can cover hundreds of kilometres in flight.

* The principal methods for fighting onchocerciasis have been vector control and early diagnosis and treatment. Vector control activities are aimed at eliminating the blackfly, the larvae of which are destroyed by the application of selected insecticides through aerial spraying of breeding sites in rivers. Once the cycle of river blindness has been interrupted for 14 years the reservoir of adult worms dies out in the human population, thus eliminating the source of the disease.

* Another effective control method is an annual single dose of the drug “ivermectin”. This drug has only limited impact on transmission, but kills the larval worms that cause blindness and other onchocercal manifestations. Supplies of the drug have been made available to WHO free of charge by its manufacturer, Merck & Co.

* Today, the disease remains endemic in 60 countries. Sixteen of them are rated as “the most endemic countries” and account for 90% of all leprosy cases. They are: Bangladesh, Brazil, Cambodia, Ethiopia, Guinea, India, Indonesia, Madagascar, Mozambique, Myanmar, Nepal, Nigeria, Philippines, Sudan, Tanzania and Zaire.

* Leprosy is caused by a bacillus, Mycobacterium leprae, which reproduces very slowly and mainly affects the skin, nerves and mucous membranes. If untreated, it leads to progressive damage to the skin, limbs and eyes. Visible symptoms of the disease may not show themselves for as long as 5, 10 or even 20 years.

* Promising results in leprosy control make it possible to think about the elimination of leprosy as a public health problem by the year 2000. Although the control of leprosy is within reach, there still is a need to maintain adequate surveillance and provide eye care to victims of the disease when necessary.

· DIABETIC RETINOPATHY is the leading cause of blindness and visual disability in adults in economically developed societies. Diabetes is estimated to affect around 120 million people worldwide. Findings, consistent from study to study, make it possible to suggest that, after 15 years of diabetes, approximately 2% of people become blind while about 10% develop severe visual disability.

* Diabetes mellitus is associated with damage to the small blood vessels in the retina, resulting in loss of vision.

* Furthermore, loss of vision due to certain types of glaucoma and cataract may be more common in people with diabetes than in those without the disease.

* Loss of vision and blindness in persons with diabetes can be prevented by early detection and treatment of vision-threatening retinopathy: regular eye examinations and timely intervention with laser treatment, or through surgery in cases of advanced retinopathy. A recent study has demonstrated that good metabolic control can also delay the onset and progression of diabetic retinopathy.

* There is evidence that, even in developed countries, a large proportion of those in need is not receiving such care due to lack of public and professional awareness. In developing countries, in most of which diabetes is now epidemic, such care is inaccessible to the majority of the population.

· INJURIES, according to a recent global estimate, may account for well over one million cases of blindness. In addition, they are the most common cause of loss of sight in one eye.

* Eye injuries may be prevented through increased public awareness of safety measures, such as the use of seat-belts in cars, protective goggles, and safe playgrounds for children, as well as through regulations or legislation for such instances as the use and handling of firecrackers. In work places, worker education regarding recommended safety measures is extremely important. Another factor is proper and timely eye care, particularly in remote areas of developing countries.

· There are a number of non-preventable causes of blindness and visual disability, usually in the form of degenerative and congenital/hereditary disorders. Some of these are strongly related to ageing, while others are very rare and are sometimes due to metabolic disorders.

* Age-related MACULAR DEGENERATION is by far the most common disorder in the group of non-avoidable causes of visual disability. Conservative estimates put the number of people who are blind or severely visually disabled because of macular degeneration at around 8 million worldwide. This figure does not take into account many populations where epidemiologic data are still scarce.

* This condition in some form or another is seen in around 25% of persons aged 80 years and older. It usually causes reading difficulties, leads to progressive loss of central vision, and finally to severe visual disability.

* Generally, age-related macular degeneration cannot be effectively prevented, although in some cases laser treatment has been shown to be of value. However, much can be done through the provision of low vision care, including optical devices and counselling, to alleviate the disability caused by the disease. With the present global trend of population ageing, the importance of macular degeneration as a public health problem will undoubtedly increase.