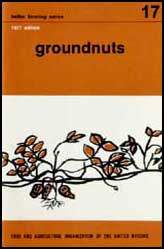 20. Before sowing groundnuts, you must prepare the soil, that is, till it.

Why till the soil before sowing?

Tilling 15 to 20 centimetres deep will stir the soil very well.

Do this work with the hoe or the plough.

Tilling loosens the soil; it gets air and water well into the soil.

In a soil well loosened by tilling, the water penetrates well and stays for a long time.

Therefore, till at the beginning of the rainy season, so that the soil holds the water.

This first tilling is very important; do it just as soon as you can move the soil.

21. Tilling, or turning the soil over, can be done with the hoe, the spade or the digging fork.

But this is slow and tiring work.

Nowadays, people use a plough drawn by donkeys or oxen. The work is done better and more quickly.

Most often, people use a simple plough. The plough consists of a ploughshare, a mouldboard and two handles.

Handles for holding the plough

22. Make a first furrow with the plough across the whole length of the field.

Make a first furrow with the plough

At the end of the field, turn.

Ploughing often does not leave the soil flat

If you do not have a harrow, you can let an animal draw big branches over the field to crush the clods.

Animal draw big branches over the field to crush the clods