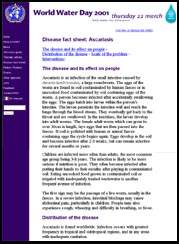 Guinea worm disease is a debilitating and painful infection caused by a large nematode (roundworm), Dracunculus medinensis. It begins with a blister, usually on the leg. Around the time of its eruption, the person may experience itching, fever, swelling and burning sensations. Infected persons try to relieve the pain by immersing the infected part in water, usually open water sources such as ponds and shallow wells. This stimulates the worm to emerge and release thousands of larvae into the water. The larva is ingested by a water flea (cyclops), where it develops and becomes infective in two weeks. When a person drinks the water, the cyclops is dissolved by the acidity of the stomach, and the larva is activated and penetrates the gut wall. It develops and migrates through the subcutaneous tissue. After about one year, a blister forms and the mature worm, 1m long, tries to emerge, thus repeating the life cycle.

For persons living in remote areas with no access to medical care, healing of the ulcers can take several weeks. This can be further complicated by bacterial infection, stiff joints, arthritis and even permanent debilitating contractures of the limbs. People in endemic villages are incapacitated during peak agricultural activities. This can seriously affect their agricultural production and the availability of food in the household, and consequently the nutritional status of their family members, particularly young children.

At the beginning of the 20th century, guinea-worm disease, was widespread in many countries in Africa and Asia. It is estimated that there were about 50 million cases in the 1950s. Due to concentrated efforts by the international community and the endemic countries, the number of cases of guinea-worm disease was reduced to about 96 000 by 1999. Guinea-worm disease is prevalent in only 13 countries in Africa including Sudan, Nigeria, Ghana, Burkina Faso, Niger, Togo and Cd'Ivoire. A small number of cases have also been reported in Uganda, Benin, Mali, Mauritania, Ethiopia and Chad.

Humans are the only known reservoirs for guinea-worm disease, and infection is through the use of contaminated water in remote rural areas of African countries. About two-thirds of the cases (66 000) reported in 1999 were from Sudan, where the continuing civil war is hampering efforts to eradicate the disease.

Provision of safe drinking-water in rural and isolated areas is the pillar intervention to eliminate the disease. The disease disappeared from many countries such as from the Islamic Republic of Iran and Saudi Arabia due to improvement in water supply. In 1991, the World Health Assembly adopted a resolution to eradicate the disease.

WHO has promoted the eradication campaign, which focuses on: interruption of transmission of the disease; surveillance of new cases; and certification of eradication. Specific interventions include: health education, case containment, community-based surveillance systems, provision of safe water, including use of filtering devices and chemical treatment of water sources.