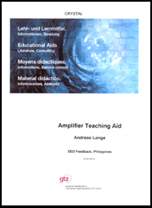 When an intrinsic semiconductor is doped with trivalent (acceptor) atoms (i.e. Baron atoms in the crystal will create a hole which is capable of accepting an electron), it has more holes than free electrons.

When an external voltage aids the barrier potential, the diode is reverse biased. The width of the depletion layer increases when the reverse voltage increases. The current is approximately zero. The reverse biased diode acts like an open switch.

Too much reverse voltage will produce either avalanche or zener effect. Then, the large breakdown current destroys the diode.

What happens to an electron in this circuit?

1. After leaving the source terminal, it enters the right end of the crystal.

2. It travels through the N-region as a free electron.

3. At the junction it recombines with a hole and becomes a valence electron.

4. It travels through the P-region as a valence electron.

5. After leaving the left end of the crystal, it flows into the positive source terminal.