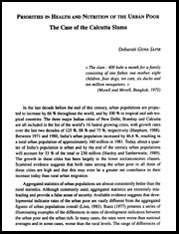 The main findings of this paper pertain to maternal and nutritional aspects of urban poor women and health specificities of the urban environment. The study is based on the fact the urban populations form a substantial part of India and among them the poor are an increasing proportion. Their condition remains unrecognised as urban statistics are generally averaged over the entire urban population and thus misleading priorities in urban development. The survey confronted difficulties in estimates of the slum population, that varied enormously. The principal findings of the survey were the following: the significance of the traditional sector in health care; the high cost of medical care and the high proportion of medical expenditures spent on medicine, the severe caloric and fat deficits among younger women and lactating mother; the tendency to spend less for medical care for women; and the penury of space and consequential exposure to polluants (e.g. toxic fumes from biomass cooking fuels). In the analyses of these findings, several areas have been identified as practical priority issues that need to be addressed by policy makers.

The urban sector in most developing countries is the leading sector in generating national wealth, therefore as Ohta and Cassim (1987) point out, the urban sector can pay for improvements of itself. The affordability review of four metropolises conducted by Ohta and Cassim indicates the poorest 20% of Calcutta receives 7% of the income. Lea and Courtney (1988) estimated 60% of the city to be below absolute poverty levels. In general, poor health and poor economic conditions among large sections of a densely populated community such as the metropolitan centres of India represent many disadvantages to the community as a whole and therefore, it is in the interests of the community to provide for the poor. Public policy on health, nutrition, and social welfare in India has traditionally emphasized rural priorities and has only recently recognized the ongoing explosion in its principal cities. The specificities of the conditions surrounding the urban poor are important enough to warrant a fresh look at the urban health care delivery. Primary health care models, largely developed for rural populations, cannot simply be transposed to the burgeoning urban poor communities in different parts of the world. Health and nutritional programmes for the urban poor should be designed and implemented according to their needs and environmental content. In Calcutta, primary health care is severely underdeveloped. Almost all care to the slum populations is provided through hospitals and is, thus, entirely curative in nature. Because the whole primary health care concept was developed from rural area population standards, the structure and orientation of the system is clearly difficult to apply in urban settings without appropriate modifications. As a result, the scope of the programmes are limited and the services are available only to those who actively seek them.

A major weakness in this survey has been the exclusion of the ultra-poor and the homeless. The issue, nevertheless, demands mention here as an aspect that the study had to confront on a daily basis while in the field. The ultra-poor are unequivocally a priority group and not only because they are the most disfranchised of all groups but also because they constitute a significant proportion of the global urban poor population. Existing outside the administrative-legal structures, they are individuals whose place of sleep or night space changes daily 4. The lack of address prevents them from availing of any facilities including the use of hospitals provided by the Government for the poor or services such as «fair-price» ration shops. The pavement dwellers in Calcutta are a large and significant part of the its urban environment and play a very important role in the city’s developmental and growth potential, not to speak of the more fundamental considerations of social equity and justice. Special programmes through a comprehensive package of shelter, health care, and economic support programmes are urgently needed for this group. Mobile health care vans for evening or night services for these poor can provide care effectively to a large proportion of the poor, who would be otherwise unable to obtain them.

4 See Sattherwaite and Hardoy (1989, see Chapter 3) for an illuminating discussion on insecurity of shelter, where Calcutta is cited as an extreme case. The «hot-bed» evidently, particular to this city, rents out beds by the hour for the homeless.

The neglect of the health conditions of pregnant mothers and of young women as precursors to conditions leading to maternal mortality also bears witness to the lack of serious efforts to improve health of women, even if it were just in the interests of the children they are to bear. The loss of a mother is possibly the greatest comprehensive disadvantage any child and family can have. Programmes targeting the prevalence of risk factors producing life-threatening conditions at delivery should be addressed urgently, starting with better studies on the extend of and the underlying causes of maternal mortality. Maternal care could be improved by a system of upgraded traditional midwives (under some from of supervision), which would not only resolve the overload on understaffed, underequipped hospitals but also lower costs and provide cleaner and effective services.

The effective use of health care by women in the Calcutta slums as in India is closely related to her status and value in society. Urbanisation has done little to change traditional attitudes and roles towards women among the urban poor. The findings concerning women in this study are an indictment of a society whose view of the woman is that of a disposable or a replaceable resource. The alarming rates of nutritional deficits among young women, the high rates of wasted pregnancies, the preferential use of traditional medicine, and the lower levels of health expenditure for them, all bear testimony to the poor condition of the ordinary, low-income urban woman.

Much has been written about oppression and marginalisation of women, less has been done to mitigate those circumstances. While there are admirable examples of action towards equal rights of women in the country, the rank and file, particularly in poorer states such as West Bengal, still live in oppressive conditions. Given the low social status and her weak decision-making capacity in her immediate family structure, special programmes for women only serve to marginalise her further, to isolate her needs and to set her apart. It was clear from the experience during this survey, that few of these women can afford either to be special or to fight for their rights within their day-to-day social and economic context. Policy makers must recognise that persons other than the targeted group of women (husbands, mothers-in-laws and elder relatives) make decisions and direct life-styles. Therefore, strategies aimed at improving the female condition could be directed more fruitfully at these realities, programmes for the betterment of the women risk remaining eternally project-oriented and voluntary sector action, vulnerable always to passing economic and social winds.

The epidemiological specificities and therefore, priorities in the health needs of urban populations are different and need to be clearly identified and considered for planning. For example, timings or hours of services need to be geared to women working long and fixed hours as construction labourers or domestic servants. Specific health risks such as traffic accidents, food poisonings, and tuberculosis are health problems that are more frequent than in rural communities and require different types of services. Efforts also are required for the rational use of drugs and unadapted prescribing practices that could partially counteract the negative aspects of pharmaceutical promotion among the urban poor and their reliance on drugs and vitamins as the main health care intervention. Indoor air pollution, particularly for mothers and children, is a major risk factor for acute respiratory illnesses.

An important strategy implication revealed in this study is the importance of misleading or falsifying statistics often used for programme development and analysis. Data on immunisation coverage without data on follow-up doses, estimation of available health care services without accounting for the traditional sector, use of health centres and posts as indicators of services without indicators of operation, are examples of how realities can be distorted and planning can become unfocused. The use of data on the existence of institutions without information on their actual effective use can and has served as alibis, providing satisfactory indications of progress while disguising the fact that nothing is actually being achieved. It should not be surprising to find that programmes do not work, if irrelevant or misleading indicators and data are collected and used. New and more imaginative approaches to the collection and use of indicators are essential to assess the situation realistically and promulgate effective policy. For exemple, wasted pregnancies along with maternal mortality are perhaps the two most revealing indicators of maternal health and status of child survival in a community. Unfortunately, neither have been recognised for their importance and data on both of these remain fragmentary and unreliable.

Finally, a major problem remains, effective access to health care services, although urban health services are extensive and for higher quality than those in rural areas, the problem is that access to these facilities even if they are free for the cities’ poor is difficult 5. In addition, the out-patients departments of hospitals are pressed to capacity and much beyond because only a few hospitals actually cater for poor, the homeless or the disfranchised. Outreach programmes to break through social barriers to use of available services should be incorporated in primary health care programmes. Hospitals should have outreach workers who are able to provide essential primary care on site and refer patients to the hospital serving the area.

5 At the seminar at which this paper was presented, a participant mentioned the several slum residents, living behind the prestigious All India Institute for Medical Sciences Hospital officially providing free/subsidied care to the general public, said they did not seek care there.

By the end of the century, half of the world’s population will live in cities. Calcutta and other Indian cities will remain among the top of the list of the largest metropolises, despite the concentration of resources, the majority of the urban population in India will probably remain beyond the reach of critical services, unless urgent efforts are made. The situation of the urban poor today is appalling, not only in India but in many developing countries. To change their situation does not require new knowledge or technology but rather new approaches and the will to act in favor of the disfranchised for the well being of all.