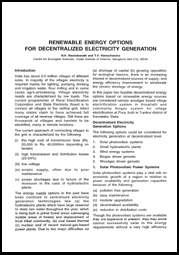 The experience of community biogas system at Pura village and community woodgasifier - energy forest system at Hosahalli village has demonstrated the following:

1. Technical and operational feasibility of decentralized renewable energy systems have been demonstrated.

2. Acceptance by the community: In case of Hosahalli even though the neighbouring villages are connected to the grid the village community has accepted the decentralized system.

3. Sustainability/Renewability: Both wood and dung are renewable sources of energy. Wood required is generated separately in a sustainable way.

4. Saving in Kerosene: All the Kerosene consumed at the rate of 3 litres/household/month is saved. Kerosene is a nonrenewable source of energy.

5. In case of Hosahalli the cost of transmission lines for connecting the remote village to the grid is saved.

6. The transmission and distribution losses are avoided in Hosahalli experiment.

However some problems encountered in decentralized systems are:

(i) Land required, though not large, for growing wood may not be available in some situations.

(ii) The village community may not always be ready to shoulder the responsibility of managing the decentralized systems.

(iii) Capital required for investment may be a constraint

(iv) Large percentage of villages are already connected to the grid,

(v) Economic feasibility of alternate systems have not yet been adequately demonstrated.

4. Reddy, A.K.N. and Balachandra, P. (1991), The economics of electricity generation from the Pura community biogas system