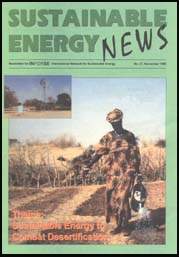 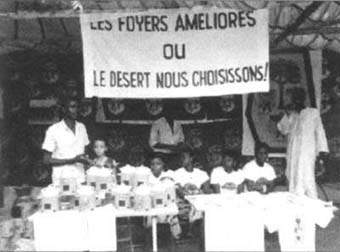 “Improved cook stoves or desert? You choose!” - From exhibition in Nigeria.

Twenty five percent (25%) of the global population live in dry, semi-dry, and sub-humid areas, confronted with the problems of desertification and drought effects. 40% of the population in Africa, 39% in Asia and 30% in South America are directly affected.

Not directly affected areas get the effects of these problems through population movements such as migrations and flows of refugees in search of better living conditions. That makes the phenomenon worldwide and justifies the implementation of the UN Convention to Combat Desertification. The Convention is intended to lead a struggle against the phenomenon and, more globally, against poverty, on a worldwide scale.

Thus, since the adoption of this Convention in 1994, African countries have started a process of elaboration and implementation of strategies and policies to combat desertification and drought effects. These strategies and policies are developed within the framework of action programs against desertification that the affected countries have promised to conduct and expand nationally, sub-regionally, and regionally.

Sustainable exploitation of energy potentials and an increase in the worth of local energy resources are priorities of these action programs in Africa, as is considering the environmental consequences of energy use. In fact, the energy problems of African countries of dry areas are characterized by the predominance of the use of wood for fuel. Wood fuel accounts for more than 80% of the final consumption of energy. It contributes to deforestation, soil erosion, and, more globally, to poverty. In the meantime, the consumption level per capita in Africa remains the lowest in the world, 0.4 toe/inhabitant. Hence, the necessity of action in order to increase it and to support adequate economic and social development.

This brings us to another dilemma. How do we increase energy consumption to support development concerns without damaging the environment? The answer to this question explains the interest that the Convention gives to renewable-energy sources as means of fighting desertification. To this new approach, we can add the interest that the partners to development, including the World Bank, give to the implementation of actions based on successful experiences, “the best practices” in the countries involved.

With this in mind, the International Network for Sustainable Energy (INFORSE), in collaboration with ENDA (INFORSE Western Africa Coordinator), set up a process to collect examples of good practices in the field of renewable energy and of eco-technology dealing with the fight against desertification. Thus, many experiences are presented in the enclosed theme from case studies in Burkina Faso, Senegal and Mauritania. They deal with wind technology for water pumping, with solar drying of agricultural products, as well as with improved stoves and solar cookers that reduce or eliminate the need to use wood as fuel.