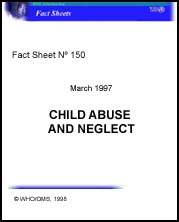 Child abuse has been a societal phenomenon for centuries. Although clinical reporting started thirty years ago, the magnitude of the problem is only now beginning to be understood. This, in spite of the fact that several national and international journals, international nongovernmental organizations (NGOs) and national societies have dedicated themselves to the problem. Child abuse and neglect (CAN) includes four distinct conditions: neglect, physical violence, emotional abuse and sexual abuse.

It is both difficult and inappropriate to make precise comparisons between countries because of the differences in the completeness and attitudes in the reporting of child abuse. However, some conclusions can be reached:

· Child abuse is found in all societies and is almost always a highly guarded secret, wherever it takes place.

· In countries with reliable mortality reporting, WHO estimates that as many as one in 5,000 to one in 10,000 children under the age of five dies each year from physical violence, although much lower rates are also noted.

· In the same countries, from one in 1,000 to one in 180 children are either brought to a health care facility or are reported to child welfare services as a consequence of abuse every year.

· According to interviews of children or young adults in Finland, the Republic of Korea and the USA, from 5 to 10 percent of all children experience physical violence during childhood.

· Physical violence often originates in the lack of parenting skills - particularly in the ability to respond to a young child's needs combined with unrealistic expectations for the stage of a child's development. This can be affected by the cultural acceptance of corporal punishment and violence within a society.

· Other stresses contributing to child abuse and neglect may include: an unwanted child, an unsupported single parent household and the absence of other means of social support, financial pressures and/or unemployment.

· Child abuse can be aggravated by substance abuse on the part of the child's parent or guardian. In substance abusing families there is a strong association between physical violence, sexual abuse and domestic violence directed at members of the family, particularly women and young children.

· The perpetrators of violence or sexual abuse of children are often "trusted" individuals, usually males, often family members, in a position of authority.

· Children who are victims of violence or sexual abuse have a high risk of becoming perpetrators of similar forms of abuse towards younger children. In later years, they may be physically violent to children in their care or to their own children.

· Physical violence and sexual abuse in the home is a factor contributing to the phenomenon of "street children" in both developed and developing countries. Further abuse on the street is an everyday reality.

THE CONSEQUENCES OF CHILD ABUSE AND NEGLECT

· The susceptibility of children to abuse and its health consequences may be determined by the child's age and stage of development. In general terms, the younger the child, the more devastating is the impact of the abuse.

· Two types of effects have been noted among young victims of abuse, namely those that are explicitly developmental and those that are specific to trauma, such as Post-traumatic Stress Disorder (PTSD), which is often characterized by symptoms of anxiety and avoidance behaviour.

· The developmental effects of abuse can be characterized in terms of loss of attachment, reduced self-esteem and fewer interpersonal relationships. There may also be problems of highly sexualized or highly aggressive behaviour, substance use, dissociation, self-injury, or other dysfunctional ways of dealing with stress and anxiety.

WHAT HAS BEEN DONE, WHAT CAN BE DONE

Each sector of society has an important role to play in preventing the physical violence, sexual and emotional abuse and neglect of children through:

· the promotion and support of the healthy development of children and adolescents;

· an understanding of the developmental needs of children and adolescents, recognizing their vulnerability; and,

· strengthening the capacity and resilience of families.

Police, judicial authorities and others involved in investigating child abuse, particularly sexual abuse and exploitation, need to be sensitive to and trained in procedures for collection of information that do not cause more trauma and preserve the dignity of the child. A number of countries have developed guidelines and training materials for these purposes.

Several of WHO's programmes have been working together to assess the global situation and to develop monitoring instruments that countries can adapt to measure the extent and nature of the problem. Such monitoring instruments will help evaluate the impact of primary and secondary prevention and will include:

· A core standardized protocol for the identification of children requesting help from health services, who are suspected of being victims of child abuse. The protocol will be tested globally with leading international NGOs in this field.

· The development and testing of protocols by WHO and NGOs for the identification of emotional abuse and neglect in young children. This will be accompanied by the compilation of an annotated review of available training materials.

In addition to these monitoring instruments, WHO has undertaken action to develop greater awareness of the issue. A circular letter to all Member States will be prepared and issued by WHO, in cooperation with sister agencies within the UN system, offering and explaining the kind of support which the Organization can provide for national action for the prevention and mitigation of the consequences of the sexual abuse and exploitation of children.

A WHO Task Force on Violence and Health has been established by the Director-General of WHO. A Plan of Action developed by the Task Force, including activities in the field of prevention of child abuse and neglect, was discussed and approved during the January 1997 meeting of the WHO Executive Board in Geneva. The implementation of this Plan of Action will begin during the current year.

The overriding principles for WHO on this issue focus on the importance of the personal well-being and health of the child. Whether in the area of child abuse and neglect, the prevention of substance use among street children or the problem of children and youth in especially difficult circumstances, WHO has a commitment to support and reaffirm the values in the 1989 United Nations Convention on the Rights of the Child. The Convention, now ratified by 188 countries, is the strongest bulwark the international community can provide against the abuse and neglect of the world's children.