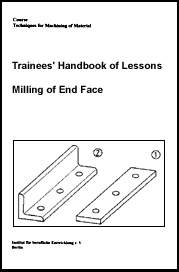 End faces are those workpiece surfaces which determine its length,

1 face side of a workpiece

They are characterized as left and right, or first and second end face.

The processing of end faces by means of the finishing operation "milling" takes place for the following reasons:

- to establish the dimensional length limitations of workpieces
- for utilization as a bolting surface for other workpieces, components and elements, and
- for yielding a visual working surface.

The processing of end faces can be undertaken using horizontal or vertical milling machines employing either plain or face milling procedures.

End faces are at right angles (90°) to the longitudinal sides of the workpieces. In exceptions one deviates from the rectangular position of the end faces. In such a contingency the resultant surfaces are described as slanting surfaces or inclines,

Where both end faces are processed and are at right angles to the longitudinal sides, then the opposite facing surfaces are also parallel to each other (parallel surfaces).

End faces can be milled:

Where are the end faces of a workpiece?

For which purpose (examples) are end faces processed?

Which milling machines are suited for processing end faces?