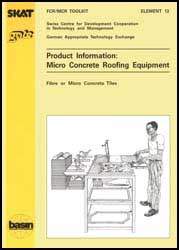 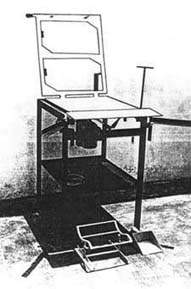 AS A PRODUCT OF AN INVESTIGATION AND EXPERIMENTATION PROCESS, THAT BEGAN IN 1990, WE HAVE AN EQUIPMENT TOTALLY PRODUCED IN PERU.

a) Vibrating table with metallic framework "Vibratej", with a vibrating unit propelled by an electric 0.5 H.P motor.

b) It is operated by one person, and has a production capacity of 400 to 500 tiles for each 8 hours work turn.

c) This machine produces 2 tile units for each vibration, and is also useful to produce floor and wall tiles.

d) It is easy to maintain, which is a guarantee of effective operation in every country region.

1. PANTILE MOULD: Based on original model evolutions, it is produced in Peru since 1990 It is the most used tile in all highland and amazonic zones, because of its similarity to colonial tiles.

2. ROMAN MOULD: Cuban moulds TFVL were introduced since 1995 At the present time, they are not produced in Peru anymore.

3. COLONIAL MOULD: It was created in Peru and used as roofing, ridge, gutter (roof valley) It is also used as complement for other models. They are produced in different styles, in order to compete with similar artisan and industrial tiles.

4. PLAIN MOULD: It was also created in Peru and it is used as ornamental roofing on exclusive residential house roofing in the city and on the beach.