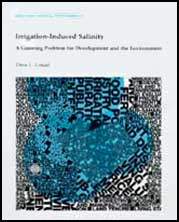 Irrigation has been and continues to be an important force in agricultural development. The expansion of cultivable land and the intensification of production achieved through the use of irrigation have contributed to substantial production increases worldwide. For developing countries, its contribution to the attainment of development objectives of food security, poverty alleviation, and the improvement of the quality of life of the rural population has been significant.

The "sustainability of irrigated agriculture, however, now faces a growing ride. The expanded dependence on irrigation has not been without cost. Salinity and waterlogging, soil erosion and sedimentation, the spread of disease-carrying organisms, and water pollution are a few of the serious problems that have gone band-in-hand with irrigation. UNEP (1987) estimated that the rate of loss of agricultural land is approximately 5-7 million ha per year and overall, salinization is the second major cause of such losses. In irrigated areas, it is the primary cause.

As the Hydraulics Research Ltd. (1990, p.1) reports, ....FAO earlier predicted that...[the area] under irrigation in the world will expand to 320 million ha by the year 2000. For many years, the rate of growth has been 5 million ha per year, but recently it has fallen to 2 million ha per year. However, this growth is counteracted by 2-3 million ha going out of production each year due to salinity problems this means that cultivated land is being lost at a similar rate to new land being brought into production." Indeed, the same countries who have invested heavily in irrigation infrastructure are not having to deal with serious salinity problems.

Irrigation-induced salinity is without question an issue which had merited limited attention in the past. Amidst spiralling demands for greater agricultural production to meet the growing demand of exponentially increasing populations, the potential reduction in agricultural productivity due to salinity cannot be left unresolved. In seeking to contain, and if possible reverse, the damaging impact of salinity, several concerns move to the forefront. How extensive is the area affected by irrigation-induced salinity? What are the factors that contribute to the problem? What options are available for solving these salt related problems? What role can farmers, the government, and donor agencies play in alleviating these problems?

This study explores the answers to these questions. The study is divided into five sections. The following section describes the process by which irrigation-induced salinity develops, while section 3 surveys the extent of the problem in various countries. Section 4 examines the physical, economic, social, and political factors that spur the onset of salinity problems by drawing from experiences from World Bank projects. Finally, section 5 presents the major findings of the study and examines the role that farmers, the government and donor agencies can play in dealing with the problem of irrigation induced salinity.