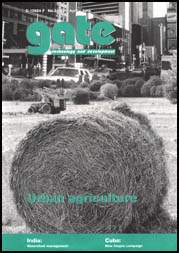 Cities are rich, the countryside is poor. As we come to the end of the millennium, this simple picture is looking more crooked than it ever was in the history of humankind. Indeed, it is about to be turned completely upside down, at least as far as the absolute numbers of the poor are concerned. The received wisdom of development theory is that the poor migrate to the city and are gradually integrated - economically, socially and spatially. Having dealt with the problem of slums, we can tackle poverty itself. The author of this article demonstrates just how different reality is. 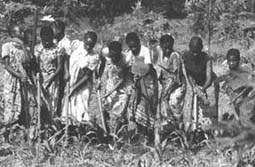 Even in Latin America, the most highly urbanised region on earth (with 82 percent of the population now living in cities), more than half of the labour force is employed in work in the informal sector. The poor make every effort to fit in with the demands of the “formal city”, to share in its “blessings” and achieve integration. Some make it, but most don’t. Their survival strategies, which we still do not clearly understand, are geared to their changing circumstances and entail dynamic combinations of formal and informal modes of behaviour, including free-rider effects and subsistence activities. In many regions, these strategies encompass “urban agriculture”, even though this important activity is commonly stigmatised as informal and temporary and at best tolerated.

Those in charge of official municipal policy and town planning must ask themselves whether their basic model of urban development is still appropriate. It derives from an era marked by almost permanent economic growth of industrial cities when, notwithstanding cyclical and social crises, there was sufficient dynamism for a century and a half to offer the labouring masses opportunities for work, education and housing that were adequate enough to enable their ultimate integration as citizens.

Debate on spaces for survival

Even in that context, it is interesting to note that - in Germany and other countries - the process of urbanisation still involved the creation of spaces for allotments and gardens, i.e. plots of land which not only provided recreation for exhausted factory workers, but also acted as a nutritional buffer for times of crisis or for individual families unable to make ends meet. These “survival spaces” were deliberately provided, and even now they generally enjoy planning protection thanks to special status as green spaces. Today, however, we see their primary function in connection with the urban ecology. The links between the cities and their own food-producing land are at best discussed in obscure categories such as “sustainable urban development” or in terms of “ecological footprints”. In this perspective, the call for a “compact city” involving short journeys and less sprawl seems actually to contradict the idea of granting the poor more space for informal livelihoods and subsistence activities.

The resistance on the part of architects and planners, who still hold a wistful nostalgia for chimeras of classical urbanity, will no doubt be gradually broken down in the medium term as they engage in meaningful debate on spaces for survival. Many examples from the history of European urban development show that this group of professionals does not necessarily reject a creative approach to agricultural and vegetational elements within the city. But resistance can be expected for two other reasons:

· the urban poor tend to make short-term use of the plots they have occupied and pass them on to a succession of relatives, so that the land becomes progressively sub-divided and built over, frequently resulting in excessive settlement densities;

· the city authorities seldom have the will or capability to provide the poor with land for building their own housing as part of a properly planned and administered policy. In all too many cases, municipal leaders feel overwhelmed by the conflicts that arise from illegal squatting and have little interest in lowering the density of slum areas, since this would only lead to even greater expansion of such zones.

The need for a new paradigm

An isolated strategy to propagate urban agriculture, or even urban forestry, will hardly be of much help, at least if the intention is to go beyond a mere temporary toleration of activities in niches. At the level of planning philosophy, we must try to get the representatives of the “formal city” to acknowledge their inability to achieve full economic integration of the great mass of the urban poor and to grant them the “human right to subsistence production” in terms of economic and social policy and the necessary urban space. This would represent a partial shift towards a new paradigm. Its necessity is demonstrated by the existing economic and social statistics, although much more empirical work is still required, as is a greater effort to advance our development theory.

What is far more difficult, however, is to draw up practical solutions which enable both sides, the urban poor and urban managers, to be winners when space is reserved for subsistence activities. This is most likely to happen if these undeveloped areas can also be used as sites for infrastructure services, such as

· decentralised storage and use of surface water: for drainage regulation and to cope with peak rainfall, to provide non-potable water for many different purposes (thus significantly reducing demand for piped drinking water), and for the irrigation of parks, gardens and areas of urban agriculture and urban forestry;

· for decentralised storage, treatment and utilisation of waste water;

· for the collection, separation, reprocessing, recycling and recovery of recyclable waste (including organic matter with uses in urban agriculture);

· for the recovery of energy from waste (biogas) or for wood (urban forestry). 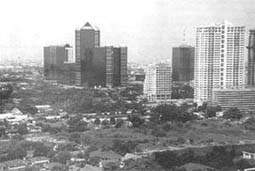 Strips of land being used for urban agriculture in Bangkok.

Involving the poor in infrastructure work

If, in neighbourhoods of better-off residents, the poor take on infrastructure work which the public-sector providers cannot carry out at all or only at a far higher price, then the poor will not only reduce their own costs of living in the city and the construction and running costs of conventional infrastructure facilities, but also acquire new sources of employment and income and ease pressures on the public funds. Under these circumstances, the down-side for urban management of reducing overpopulation within the slums would be more than offset by savings that could be made in the authorities’ day-to-day costs of running the city. Indeed, this would also create an incentive for the poor themselves to prevent their residential areas from becoming excessively densely populated. They would be acting in their own interest. In any case, the official system of land use regulation is not usually capable of achieving this goal.

This concept makes particularly good economic sense if it can create positive side-effects on the urban ecology, i.e. if the undeveloped spaces to be safeguarded include land on which building development would in any case be harmful. Typical examples of such land are steep slopes (particularly well suited to urban forestry) or flood plains and drainage valleys, since these are precisely the areas which yield high casualty rates and high damage costs when disasters occur in the wake of misguided urbanisation.

The idea, then, is that the urban poor would become actively committed to schemes for urban management, urban ecology and disaster control provided that their efforts turned out, on balance, to bring economic advantages. Of course, professional instruction would be needed, especially at the beginning, as would proper supervision to ensure compliance with hygiene standards. Yet, here too, supervision is far more effective if people’s economic interests point them in the same direction by means of adequate payment for infrastructural services provided at acceptable quality standards and a lowering of their own costs of living.

Finally, we should bear in mind that the debate over sustainability embraces not only the ecological and economic but also the social dimension. Active, integrated citizens are those members of the community who not only use their cities - and this also applies to even the most successful “global players” - but also help to build, run and maintain them.

This does not only mean the pursuit of the “classical” civic activities of the past (trade, finance, administration and, in historical order, finally industry). It can also include subsistence elements. Such “survival spaces” can certainly become communitarian places, capable of generating more local public spirit than is found in many of the so-called “highlights” of urbanity with all their generous public funding.

The myth of the normal city

Those who survey the situation of the slums from the perspective of a uniformly affluent city would soon have to come down from their high horse if they bothered to read up on the real history of the European city. We only have to recall the plight of the Roman plebeians, the medieval “Pfahlb#148; living outside the city walls, and the countless casual labourers in the cities of royal residence - let alone the impoverished urban strata in the epoch of early capitalism.

The normality of the city is not and never was the fictitious “normal city” that we find so difficult to debunk. Its myth is so strong that we take refuge in the schizophrenia of the “formal” and “informal” city. In trying to understand the city, we should perhaps make things easier for ourselves and simply distinguish between the different forms of urban living and urban survival and start concerning ourselves with their interlinkages and mutual dependencies.

Hans-Joachim Hermann
is a GTZ sector planning expert working on “Community and Urban Development” in the Division for Reform of Government, Economy and Civil Society.