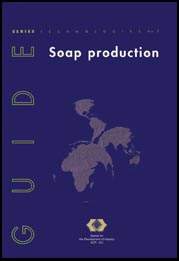 The full boiled process differs from the semi-boiled process in its various glycerine extraction, washing, and adjustment operations which occur after saponification. The temperature at which the mixture is kept under vigorous agitation is generally higher (100°C), allowing a wider range of fatty raw materials to be used.

After saponification the mass is subjected to several washes using brine. The more intensely the glycerine is washed, the lower the glycerine content of the soap. By recycling the washing waters drawn off several times, glycerine concentrations in the region of 15 to 20% can be obtained.

The electrolyte (soda lye) concentration is then adjusted and, after maturation, an upper phase made up of neat soap* and a lower phase made up of nigre** form. The latter, which contains a high proportion of impurities, is partly recycled during the saponification process - where it eases emulsification - and partly used in the manufacture of low grade household soap.

* Neat soap, comprising approximately 3/4 of the mixture, contains ± 30% water and has a fatty acid content of approximately 63%.

Neat soap, retained mainly for the manufacture of high-quality toilet soap, is drawn off and moved to the drying and finishing line.

The basic process may be modified somewhat to ensure that it meets the producers' objectives. Thus the use of a set of 3 to 6 tanks for enriching the washing water with glycerine, or of the counter-current washing technique make it possible to improve production rates.

The full cycle of operations takes nearly a week, and is broken down as follows:

To maintain the correct level of activity throughout the production line, the full boiled process requires a large number of tanks operating simultaneously as well as a large workshop area. These factors place a substantial strain on initial investment, so that this type of process is justified only when the marketing of large volumes of high-grade soaps is anticipated. Moreover, the process is more complex than it appears and requires considerable expertise in the technology and organisation of the various manufacturing stages. Finally, the process is relatively labour-intensive.

The full boiled process involves the recovery of glycerine as a by-product. However, it has been estimated that 15 to 20 t/day fatty raw materials need to be processed for the operation to be economically viable. Furthermore, there are only few outlets for glycerine in developing countries.

The process is highly flexible and has a proven track record. It allows a wide range of soaps to be manufactured, from basic household soap to top-grade toilet soap. However, constraints in terms of volume, investment, by-product upgrading and technological and operational expertise limit the appeal of the process and require a detailed analysis of the economic and commercial viability of any project based on this type of technology.