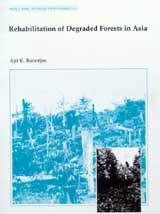 The rapid pace of worldwide deforestation disturbs the global ecology and hence attracts much attention. What does not catch people's notice so quickly is forest degradation. The process of degradation is often gradual, over a few years or a dozen, and people are likely to miss the change. But the change does take place. Over time biodiversity is lost and vegetation density and soil cover decrease, and these losses culminate in soil erosion, reduction in agricultural productivity, and ultimately loss of productive land that may have taken thousands of years to build. As productivity disappears, the people living on the forest fringe, or inside its boundary, and subsisting on its products and their labor are made destitute and are forced to join the unemployed in nearby villages or townships to eke out a meager existence. A large proportion of the poor in most cosmopolitan areas of developing countries are those deprived of their land in this manner. Rehabilitation of degraded forests is thus a task that cannot be put off.

The extent of forests that have been degraded is not well documented because the definition of degradation is not very specific. However, many observers estimate that degraded forests cover millions of hectares and are spread throughout all of the Asian developing countries, with most in the tropical and subtropical belts. The task of rehabilitation therefore is not only urgent, it is also colossal.

There are other important reasons for timeliness. Taking on the challenge now rather than later would not only save the land from further
degradation, increase forest benefits, and improve the economic status of the people living m or near the forest, it would also cost less than if the work were delayed. Therefore, international development agencies and national policymakers would do well to give priority to the job and allocate appropriate resource for it.

In Asia, a working definition of degraded forest areas is: shindig cultivation areas, In rata grasslands, low-profile hacked forests, and overlogged forests. The success of rehabilitating these areas depends both on enactment and execution of appropriate policies and on application of correct technology.

The most important national policy would be to introduce measures that neutralize the causes leading to degradation. Another step could be to promote participatory forestry by which the population adjoining forests are given usufruct to the forests m exchange for managing and protecting them according to management plans drawn up with the government. This strategy would not only save forests from destruction but would also alleviate local poverty. Other efforts could include introducing policies that encourage low-impact harvesting and that generate higher forest rents and timber prices than those generally obtained by forest owners (primarily governments). In addition to these and other policy introductions, however, corrective technology must be applied.

Foreword and technical aspects cannot be distinguished —as m taungya cultivation or participatory forestry. A number of thought-provoking papers have been written on these policy issues, but there is not enough documentation on the technology needed for rehabilitating degraded forests and, particularly, on the different manifestations of degradation m one place.

This. paper, therefore, focuses on technologies that have proven effective in some areas of Asia, on the expectation that, with ate-specific modification, they can be replicated in other areas. The paper is intended to be of general use to project managers during project preparation and supervision of forest rehabilitation projects.