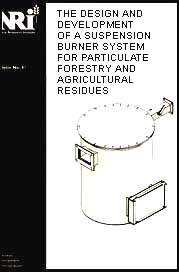 The sample of coir residue received from a Sri Lankan coir factory consisted of pith and fibre at a moisture content of 86% (wet basis). During consideration of the potential use of this material as a fuel for a suspension burner a simple assessment was made of various methods of expelling the surface water. The results of this work and a general summary are given below.

Trials with a hydraulic press

A weighed amount of material was placed in a slotted cylinder and compacted by a hydraulic ram to extract the water. The load, sustained until the flow water ceased, was measured by a transducer and the overall moisture content of the pressed material was calculated. The pressed material was in the form of a solid cake. The results obtained are shown below:

Table - Trials with a hydraulic press

Trials with a screw press

A known amount of wet material was placed in a perforated cylinder and a load was applied through a screw (50 mm diameter, 6 mm pitch) for approximately 5 minutes. The screw was turned manually, using in the first trial a short lever and in the second and third trials a longer lever.

Table - Trials with a screw press

It is possible to dewater coir residue to approximately 65% moisture content using a screw press. However this should be considered a reasonable practical limit when considering the repetitive manual batch-process required.

It should be noted that assuming a 40 kg/h feedrate, a volume of approximately 0.5 m3 of wet material (equivalent to 286 kg at 86% moisture content) at a bulk density of 600 kg/m3 will be required. If the pressing area can be increased by 25% (total loading about 19 tonnes), 8 pressings per hour would be necessary. At a compaction ratio of 4, the screw travel would be 750 mm, which can only be shortened by the use of 2 or more presses as the pressing area has been maximized.

Physical characteristics of the pressed material

A sieve analysis was carried out; the results are shown below:

Trials with a centrifuge

A moisture content of 75% was achieved using a small spin dryer. It is possible that better results could be obtained on a faster and more powerful machine. However any such machine may prove expensive.

Trials with Protessor expeller and a Rosedown expeller

Dewatering proved unsuccessful as it was not possible to feed the wet coir residue into the expellers.

The need in the coir fibre industry is for low cost/capacity equipment; it is therefore clear that within this framework a purpose-built screw press would be acceptable. However, the final moisture content of the product would not be less than 65% and would be in the form of a compacted cake having the dimensions of the press body. This cake has considerable stability and would require significant mechanical action to break it down for suspension burner use and further drying if deemed necessary. Given the characteristics of a screw press operation, the pressed cake's relatively large dimensions, and the significant levels of large fibres present in the product, it is clear that, whilst this amount of dewatering may be acceptable on a cost/operation basis, it would present considerable difficulties for suspension burner operations.