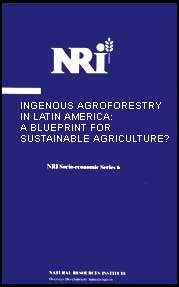 It can be argued that traditional agroforestry practices in Latin America make the best possible use of forest plant and animal resources. Not only are these management systems sustainable at current land/man ratios and possibly sustainable at much higher population densities, but they also increase the economic and social usefulness of the forest at large, by encouraging biotic diversity through successional management and providing a wide range of products for consumption and sale. Adoption of these systems would reduce the need for widespread annual cropping, large-scale forest destruction and land degradation associated with pasture creation by the new colonists.

Much of the research on traditional indigenous agriculture (both Amerindian and its derivations) has been of a descriptive nature. There have been few attempts to translate this experience into a system for sustainable agriculture for the new settlers of the Amazon Basin or elsewhere, even though many of the commentators on this subject (Anderson, 1989; Browder, 1989; Denevan et al., 1984; Eden, 1990; Padoch and de Jong, 1987, 1991; Posey, 1985) have suggested that this approach has the greatest potential both economically and ecologically.

At present indigenous techniques of agroforestry do not play a significant role in the rural economies of many Latin American countries. This is largely because of the decline in numbers of traditional societies; 87 Amerindian ethnic groups have been lost this century (Posey, 1983) from the introduction of exotic diseases by outsiders.

Furthermore, in development circles, indigenous agroforestry techniques have been ignored. The focus of research and development has been concentrated on community natural resource management and extractive reserves, despite the fact that it has been estimated that there are between 1 and 2 million households in the Brazilian Amazon alone that derive their living almost exclusively from agriculture, not extractivism. The high profile that extractive practices have developed in the past few years persuaded institutions to support this activity, when it is argued by some (Anderson, 1990; Browder, 1990) that this form of forest management produces less in terms of income than extensive or intensive agroforestry.

Besides the lack of appropriate research, the main constraint to the potential adoption of indigenous agroforestry techniques by new colonist farmers lies in their very complexity. High levels of often very location-specific technical knowledge and skills are needed to implement them. Also, sufficient micro-economic information regarding labour use and production costs of agroforestry activities is not available, whether to help agricultural research institutes develop the more economically viable adaptations, or to help governments develop enabling policies.

It is certain that public or donor support, both technical and financial, will be necessary to aid the new colonist to adopt these techniques. Extension services will be essential, given the lack of agroforestry knowledge of the new colonist at the frontier. Financial support will be required for the development of rural marketing infrastructure, post-harvest technology and research to establish the socioeconomic conditions necessary for the successful introduction of this type of land use.

Furthermore, there is a need for government policies to be put in place which would help to curb land speculation and encourage new colonist farmers to adopt sustainable management practices. It is also necessary for governments to improve conditions for the poorest farmers or landless in their home states, in order to stem the tide of colonization of the rainforest.

Thus few serious attempts have been made to develop and promote sustainable agricultural or agroforestry based upon traditional swidden management practices in Latin America, despite the interest in these techniques over the last decade (Anderson, 1990; Browder, 1989; Denevan et al., 1984). There is, therefore, great scope for donors to contribute to research and extension, and to assist in the dissemination of existing indigenous technical knowledge, so that it can be adapted to form a blueprint or model for sustainable and productive agriculture for the new colonists. The governments of the Amazon region should also play a part in improving access to resources for the poorest farmers, and establish that they are committed to the conservation and sustainable use of natural resources.