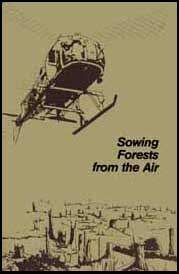 As already noted, there is almost no experience with aerial seeding in developing countries. But in such countries the everincreasing gap between forest destruction and forest planting demands that consideration be given to any reforestation methods that might be undertaken on a wide scale with less effort than the conventional methods.

Direct (i.e., broadcast) seeding is already used with some species in some developing nations. In parts of East and West Africa and the Sudan, for example, Acacia nilotica, Acacia senegal, Cassia siamea, neem (Azadirachta indica), Gmelina arborea, and cashew (Anacardium occidentale) are all routinely established by direct sowing of the seed. In the Philippines it has been found that direct sowing of cashew is a promising reforestation technique for areas covered with Imperata cylindrica. (No site preparation was used, but the seeds were buried 1-5 cm deep -Cadiz and Dalmacio 1978). It is reported that in Zambia at one time Eucalyptus citriodora, Eucalyptus camaldulensis, and Eucalyptus tereticornis were all direct sown "with considerable success," although they are now almost entirely planted as tubed stock (Laurie, 1974). In Guatemala the direct seeding of a watershed using repellent-treated seed of Pinus caribaea and Pinus oocarpa has proved quite satisfactory (reported by J. A. Lewald., see Research Contacts). Aerial seeding of Prosopis juliflora was successfully carried out to stabilize sand dunes in Gujarat, India, in the 1950s (information reported by M. N. Vaishnav, Conservator of Forests, Gujarat State, India).

However, out of the handful of trials with aerial seeding in the tropics, only those of Indonesian foresters carried out in the early 1970s seem to have been well documented.

(The text of this section is based on a translation from the Indonesian provided by K. Freerk Wiersum)

In 1972 trials were established to test the possible use of aerial sowing in the forestry districts of Balapulang (Central Java) and Lawu (East Java-results of trials at Balapulang and Lawu have been reported by Sumarna and Sudiono, 1974a and 1974b, and Hadipoernomo, 1979).

The Balapulang trial took place in an area with average rainfall of 2,500 mm (3 dry months with less than 60 mm rain and 8 wet months with over 100 mm rainfall). The soils were a complex of heavily eroded grumusols (vertisols), regosols, and Red Mediterranean soils (alfisols) on a substrate of marl and limestone. The vegetation consisted of Imperata cylindrica mixed with some shrubs and herbs such as Mimosa spp. Terrain was prepared by tractor plowing or cutting and burning or was left untreated. In December 1972, 370 hectares were aerially seeded. On average, 24.8 kg seed were sown per hectare. The seed was a mixture of Sesbania grandiflora, Leucaena leucocephala, Calliandra calothyrsus, Acacia auriculiformis, and a species of Dalbergia(The germimabilitv of the different species is given as Sesbania, 42 percent; Leucaena, 70 percent; Calliandra, 37 percent; and Dalbergia, 70 percent; other species, no data. No information on seed preparation is reported.).

The results are given in Table 4. After 10 months the stocking percentage In plowed fields was 89.4 percent and in burned fields 73.8 percent. After 7 years the land was covered by trees, erosion had stopped, and a humus layer had been formed on the prepared terrain. No success had been obtained on fields without terrain preparation (Sumarna and Sudiono, 1974b; Hadipoernomo, 1979. ).

The Lawu trial took place in an area with average rainfall of 1,800 mrn and 4-5 dry months each year. The area is situated at 800 m altitude on intermediate and basic volcanic deposits on which a complex of lithosols and redbrown latosols occurs. It was a difficult site for forestry, with slopes averaging 35 degrees and shallow, nonporous soils with only a thin humus layer. Vegetation consistmg of Imperata cylindrica mixed with Lantana camara, Eupatorium pallescens (E. inulifolium), and grasses covered the area. Terrain was prepared by hoeing or cutting and burning or was left untreated. Sixty-five hectares were seeded In November 1972. A mixture of Acacia auriculiformis and Calliandra spp. was used at about 53,000 seeds per hectare.

(Germinability of each species was about 50 percent). The results in October 1973 are given in Table 5. The untreated sites have the highest establishment (Soemarna and Sudiono, 1974a).

Aerial seeding of areas dominated by Imperata cylindrica was successful in Java. The average stocking after 10 months was about 75-90 percent by the use of 24.8 kg seed per hectare (which is a large amount of seed). In preparing the terrain, plowing with a tractor gave better results than burning, while hoeing demonstrated the worst results. The results on untreated plots were variable. Of the species used, the most promising were Leucaena leucocephala and Calliandra calothyrsus. Sesbania grandiflora and Acacia aurieuliformis showed high early success, but later mortality was high. A species of Dalbergia failed and Pinus merkusii was used in quantities too small to give results.

World War II left many Pacific Islands bomb pocked and denuded of vegetation. To restore a plant cover the U.S. Navy seeded Guam, Saipan, Tinian, Corregidor, and other islands with leucaena dropped from bomber aircraft. Today these islands are densely covered with the plant (unfortunately a seedy, bushy variety was used and it has since become a rampant weed. The arboreal types were not then available. -For more information see National Academy of sciences. 1977 .Leucaena Promising Forage and Tree Crop for the Tropics.)

The technique had been pioneered in Hawaii as far back as 1926 when a large burned section of forest in the Panaewa Forest Reserve near Hilo was sown from the air.

Many of today's dense stands of leucaena on low-elevation, dry slopes on Oahu may result from aerial sowing in the 1930s sponsored jointly by the U.S. Army Air Corps and the Territorial Division of Forestry. In 1936, for example, 11 tons of leucaena seed were dropped over denuded areas on Oahu.

Hawaiian foresters also used other species in addition to leucaena. For example, in July 1926, 250 kg of mixed seed of 35 tree species were dropped from a Loening aircraft over a burned area of the Panaewa Forest Reserve on the island of Hawaii; 20 species were established, resulting in a forest containing many Melochia indica, Cecropia obtusifolia, and Spathodea campanulata. Further, aerial seeding was carried out in 1929 and 1932 on the West Maui mountains and parts of the Pupukea, Ewa, and Kawailoa Forest Reserves by an employee of the Hawaiian Sugar Planters Association in cooperation with the Army Air Corps. Some of the species that may have become established as a result of this work include: Acacia confusa, Cecropia obtusifolia, Spathodea campanulata, Albizia falcataria, and Psidium guajava. In 1937 the Army Air Corps helped the Hawaii Forestry Division aerially seed 7 tons of seed of trees, shrubs, and grasses on Kauai and Oahu (Information supplied by R. Skolmen).

In the early 1960s an aerial seeding trial was conducted in northern Nigeria using neem. A strip 30 m wide and 5 km long was sown from the air at an average density of 12 seeds per m2. The seeding produced profuse germination, but all seedlings in direct sunlight died of sunscorch; only those shaded by natural scrub survived the dry season. It was concluded that "the method would succeed if sufficient ground cover could be assured (Forestry Abstracts 1964 Volume 25: Abstract No. 574).