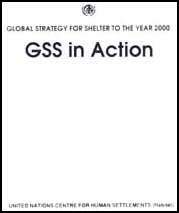 Maria Sepulveda and her husband relax on the porch of their new timber house. Under Chilie's scheme of compassionate subsidies, Maria's family were entitled to the type of loan aimed at the poorest of the urban poor. People in other circumstances are entitled to other loans.

Subsidies for those most in need

Maria Sepulveda has had some difficult times in her life. Her husband was injured in a logging accident at his work-place near the southern Chile town of Puerto Montt some years ago, and since that time her family has been dogged by financial problems. Yet one thing has gone well for M aria and her crippled husband. They have succeeded in obtaining a fine timber house to shelter them from the high rainfall and the winter snow of southern Chile. This home is now the centre of their world.

It was made possible by the introduction of a compassionate system to help low-and middle-income households to obtain housing. The basis of this recently-introduced system is a number of housing subsidy schemes.

The subsidies are given in a considerate manner to people attempting to purchase their homes. The scheme enables the poorest households to get the maximum subsidy. The system is very important because it allows 88 per cent of Chile's population access to housing.

The Government makes grant awards to eligible families from funds derived mainly from international loans. For example, a World Bank loan of $US 200 million was made available to the Government of Chile for the housing subsidy programme, which covers almost 20 per cent of the total investment. Similarly, the Inter-American Development Bank has put forward a loan of $US 70 million for Chile's Sites and Services Scheme.

Maria's family was eligible for the type of loan known as Marginal Urban, aimed at the poorest of the urban poor. Under this scheme, a household can receive a subsidy of 75 per cent of the total cost of either a core house or a serviced plot. Maria and her husband opted for the core house, which consisted of three rooms. The cost of this core unit was approximately $US 3200.

Other types of subsidies are available to people in other circumstances. The Urban Loan applies to the needs of people in the low- and middle-income sector in particular, and decreases as the value of the unit increases. The loan can be repaid over a 10- to 30-year period, and the property that is being paid for by the loan becomes the loan guarantee.

Another subsidy is designed to suit people in the rural areas or in small settlements of less that 2500 inhabitants. About 6500 subsidies are made per year under this part of the programme to a maximum of about $US 2700.

In addition, there is a special category, targeted again at low- and middle-income sectors which are granted through unions, municipalities and organizations. A total of 15,000 grants are made annually, valued at about $US 1000 each. In 1989, the total number of housing units being subsidized in Chile was 79,000.

For housing transactions, an alternative to the regular currency is in use. This is called the Unidad de Fomento (Unit of Development) or UF. In September 1989, one UP was equivalent to approximately 5100 Chilean pesos, roughly equivalent to $US 17. The value of the unit varies and is examined and assessed on a monthly basis by the Examiner of Banks and Financial Institutions. All savings and financial pledges in Chile are expressed in UFs, as are all housing transactions.

People who are aiming for home-ownership are encouraged to save and are rewarded when they do so, in two different ways. First, the number of UFs deposited in a savings account are rewarded by points; secondly, points are also awarded for UFs not included in the loan request. The progress of each saver is checked after six months and if the individual has fulfilled his or her obligation, extra points are awarded. The points earn savings bonuses. Long-term savings contracts with cooperatives or institutions can only be signed for periods of 18 months or longer. In addition, the Government guarantees deposits of up to 108 UFs ($US 1944). Points are also awarded for the length of time that money is left in the account. In March 1989,416,000 housing-related savings accounts were in operation in Chile.

Those subsidy schemes have been developed in a difficult economic climate. During the decade starting in 1980, inflation varied between 9.5 per cent and 31.2 per cent with an average of 20.6 per cent. Despite these difficulties the Government has committed itself to the production and sale of housing units for low-income families, subsidizing the transactions, guaranteeing mortgage loans, and encouraging personal and family savings by offering bonuses on sums of money saved'

By these equitable and humanitarian policies based around an easy-to-use subsidy system, the Chilean Government has enabled 90 per cent of its people to have access to adequate housing. This system of subsidies is a recommendation of the Global Strategy for Shelter which is promoting the provision of shelter for all by the year 2000.