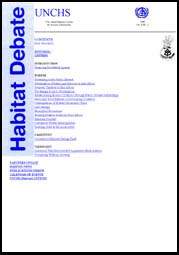 The Urban Challenge in Africa: Growth and Management of its Large Cities

Scholars from a range of national and disciplinary backgrounds examine in this volume the growth of the largest cities in Africa - their characteristics, their dynamism despite economic crises, and the outcomes of attempts to manage them. The introductory chapters consider the effects of global forces on Africa and its major cities, revealing that the new phase of globalization has reinforced the continent's marginalization, impoverishment, indebtedness and lack of policy autonomy, rather than leading to economic growth and diversification. Case studies of selected cities (Cairo, Lagos, Johannesburg, Kinshasa, Abidjan and Nairobi) reflect the experiences of the largest urban agglomerations. The experiences of these and other cities are drawn upon in thematic chapters dealing with the characteristics of city economies; property markets; politics, governance and social organization; and the lives of urban people, including migration patterns and the effects of impoverishment.

In the major cities of Asia, Africa and Latin America, the urban poor often have to step outside the law to gain access to housing. Much has been written about the problems they face, but few studies have asked why it matters that their housing is illegal, or what should be done about it. Illegal Cities seeks to answer these questions by exploring the role of law in the process of urban change. Its broad geographical coverage combines national case studies, mostly written by experts from the countries in question, with overview chapters by leading specialists in the field. The need for urban reform in developing countries provides the underlying theme uniting contributions to this book.

Sharing the World: Sustainable Living and Global Equity in the 21st Century

This book is a contribution from the Sustainable Europe Campaign of Friends of the Earth, a campaign which began in 1992 to assess what sustainable development means in practical terms, and how it can be achieved. Divided into 8 chapters, the book looks at the inequality caused by overconsumption and proposes a practical, gradual approach to fundamentally altering industrial processes and the values that drive consumerism, so that the world shifts to clean, sustainable and satisfying modes of living within the boundaries of “environmental space”.

This Environmental Planning and Management (EPM) Source Book carries: (a) abstracts of case studies from 32 cities around the world illustrating how cities with a wide variety of different geographic, political and socio economic contexts approach urban environmental issues through a similar process framework; (b) 20 fact sheets on international support programmes working in urban environmental planning and management; and (c) the Istanbul Manifesto, drafted and adopted by over 200 participants representing more than 70 cities and over 20 international programmes, in Istanbul, Turkey, on 1 June 1996.

This directory contains the full contact addresses of all members of the Urban Environment Forum, a global coalition defined by the shared concerns of its members, who are development practitioners centrally concerned with urban environmental management.

This book presents the results of a three-year (1994-1997) gender research programme on Urbanization, Planning, Housing and Everyday Life in Southern Africa (GRUPHEL, Phase II). The GRUPHEL studies are all based on empirical material in the socio economic and political context of southern Africa in the mid-1990s, illustrating how vulnerable groups in urban areas are striving to cope with and challenge traditional gender roles in periods of transition and economic decline.

This report summarises major successes and setbacks in implementing the Beijing Platform for Action by presenting data from 90 countries. The report is an effort at strengthening the capacity of women's movements to demand accountability from governments and other policy-makers for people-centred and gender-aware policies at all levels.

This manual is intended to provide trainees and managers with a direct, simple and innovative approach to evaluating training's impact. Its main purpose is to support the implementation of capacity-building components of National Habitat II Plans of Action. The manual's emphasis is on evaluating the impact of training, not the delivery of training.

This book presents the findings of a study designed to determine what privatization has taken place in Africa over the past ten years, what its impact has been, and the lessons for decision-makers. The country case studies covered include Benin, Burkina Faso, Ghana, Kenya, Madagascar, Mozambique, Nigeria, Togo, Uganda and Zambia. The principal aim of the book is to contribute toward an understanding of and improvement in the process of privatization in Africa.

Published by UNCHS (Habitat), with the support of the Ford Foundation Office for Eastern Africa, Nairobi, 1998 (HS/521/98E)

This is the report of a Regional Workshop on the Privatization and Financing of Municipal Services in Eastern Africa, held in Naivasha, Kenya in April 1998. The objective of the workshop was to critically discuss the draft report of a research project conducted by UNCHS (Habitat) on “Privatization and Financing of Municipalities in a Decentralized Environment: A Governance Approach to Human Settlements Management” in 1997.

All UNCHS (Habitat) publications may be obtained from Habitat Information Offices <offices.htm> or by writing to:

* Note: F/S indicates that the publication is also available in French or Spanish.

Charges for publications will be levied on applicants from countries that fall into the High Income Economies category as defined by the World Bank1. All other applicants, i.e. those from developing countries and all bona fide students, regardless of country, are exempted from payment.

Cheques in US$ should be made payable to UNCHS (Habitat)

UNCHS (Habitat) has a few videos about micro-credit and financing which might prove of interest to Habitat Debate readers. These videos are part of the larger catalogue of productions which can be found on the UNCHS (Habitat) website. The videos cost $25 each and can be ordered on e-mail from <videos@unchs.org>.

The goal of women's bank operations is to facilitate the development of poor urban families, focusing on women as the central figures. Women's banking groups have mushroomed all over the developing world. This particular example is from Sri Lanka.

The economic plight of women in low-income settlements and a community-based system of credit is the subject of this video. It explains the evolution of Women's Mutual Help Groups in various communities in Colombo and the positive impact of access to affordable credit on the lives of poor women. By involving the women themselves in the credit scheme, their economic improvement is reinforced by their sense of solidarity.

This video is part of the UNCHS (Habitat)/DANIDA Community Participation Training Project. It was prepared as part of a six video training package in conjunction with the NHDA and low-income groups in Colombo. The videos that follow the experiences of communities through particular phases of their settlement upgrading project.

This video focuses on the low income financing scheme designed to support householders in their efforts to reconstruct their houses after they had been allocated plots within the new site plan drawn up for Namuwongo in Uganda. The video analyses major issues that emerged in the course of project implementation including the incapacity of very low-income people to qualify for loans and the fact that loans were made accessible to rich families who bought out poorest residents.

This video is part of a larger series on housing and shelter development strategies in Namuwongo in Uganda.

To order and for a full catalogue of all UNCHS (Habitat) videos, please write to: