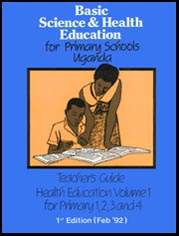 Encourage their parents to take their younger brothers or sisters to the clinic for immunisation.

a) The six immunisable diseases in children.

b) Reasons for having children immunised.

· Tuberculosis, whooping cough, diptheria, tetanus, measles and polio are common (diseases) in children, and can cause suffering, disability and sometimes death.

· They can be prevented by immunisation.

· These immunisations are given to young children, starting at birth.

· By the age of one year, children should have received all the immunisations.

· Children who are fully immunised should not catch these diseases.

· Children who are not immunised at all or not fully immunised catch these diseases.

Notes for the Teacher:

Tuberculosis, whooping cough, diptheria, tetanus, measles and poliomyelitis are common diseases in children. These diseases can be prevented by immunisation. However, children who are not immunised at all or not fully immunised may get these diseases.

Children who catch these diseases are often very sick and many of them die. Those who recover from these diseases do so after spending many days or weeks in bed. A number of them remain with permanent damage (handicap) from the disease.

Tuberculosis is spread to others through the air. It can also be spread by drinking unboiled milk from a cow that has tuberculosis. The infected person can also infect other people who live in close contact with them. If the disease is not treated that person eventually becomes very sick and dies.

Whooping cough is caused by breathing germs from another person who has the disease. It causes cough which occurs continuously and ends with a whoop. The child with whooping cough also has fever and a running nose.

At the end of each whoop the child may vomit. If the disease is not treated early the child may die from lack of air because of continuous coughing. Those who survive may develop malnutrition as a result of vomiting the food.

Whooping cough immunisation is given as an injection to babies, starting at 6 weeks of age. It is combined with diptheria and tetanus and is repeated three times. There is an interval of 4 weeks in between the injections. After the child has received the three doses, she is protected against whooping cough. (See immunisation schedule in chapter 5).

This is not a common disease but it may occur among people who live in crowded places. Children with diptheria have fever, and a membrane which covers the throat causing difficulty in breathing.

This membrane may suffocate the child to death. Diptheria is prevented by immunisation. The vaccine which is usually combined with that of whooping cough (pertussis) and tetanus, and is known as DPT. Doses are given three in all.

The germs that cause tetanus enter the body through cuts or bruises. They may enter through a thorn prick or a jigger or umbilical cord of new born child. The disease causes all the muscles of the body to contract. Patients who have tetanus cannot open their mouth and they are rigid. People who catch tetanus often die even if they receive treatment.

Immunisation against tetanus is given to babies starting at 6 weeks of age. The immunisation is given as an injection that is usually combined with that of diptheria and whooping cough (pertussis) and known as DPT. Three doses are given to protect against the disease.

Tetanus vaccine should be repeated every 5 years to ensure continuous protection. It is also necessary for women between 16 - 49 to have a tetanus immunisation (this is known as tetanus toxoid). This gives protection to their unborn child before they get the disease.

This is a common infection in children. It can attack many children at once. It is spread from one person to another through the air during coughing, sneezing or talking.

Children with measles are usually very sick with fever, skin rash, sticky red eyes and coughing. The cough sounds like the barking of a dog. Some children develop dehydration because of diarrhoea and vomiting. Some recover but others die from the disease.

Polio is a dangerous disease that causes paralysis of the body. The germ that causes this disease is passed in feaces and may spread from one person to another by means of unwashed hands, flies contaminating food. If the child does not die from polio, he remains with permanent paralysis.

There is no treatment for polio.

Paralysis or weakness in one or more limb.

Immunisation is usually carried out at the clinic or in the hospital.

Children are usually weighed and given a card. On each card the name of the child is written. The immunisation given is recorded, (see chapter 5)

If all immunisations are given, it is recorded on the card. A child who has received all the imunisations is protected agaist the six diseases - measles, polio, whooping cough, tetanus, tuberculosis and diptheria.

SOME ACTIVITIES FOR PUPILS

1. Immunisation games such as snakes and ladders. (See School Health Kit on Immunisation).

2. Creating an immunisation corner in the classroom. (Something similar to a place where immunisation is given for children to role play).

3. Looking for scars of immunisation on their arms. They can count pupils with scars and those without. Identify which arm has a scar.

1. Testing knowledge of the subject.

2. Ask pupils to find out from their parents which immunisations they have received. They should report back.

3. Ask pupils to report on their younger brothers and sisters about the number of immunisations they have completed.

(What have you learnt from this chapter?)

1. What are the names of the six immunisable diseases.?
2. When should a child have its first immunisation?
3. What is the importance of immunisation to children?
4. How many immunisations are given for:

5. What is the danger of not being immunised or completing the recommended doses of immunisations mentioned above?