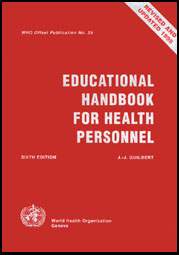 This 1998 updated reprint of the sixth edition in English is being published shortly before the thirtieth anniversary of the Handbook. The first edition was prepared in 1969 on the basis of the first educational workshop organized by the WHO Regional Office for Africa in Brazzaville. Initially, the Handbook was widely used in the African Region, and has since served as the main textbook for numerous WHO-sponsored workshops attended by over 4000 participants in different parts of the world. Thanks to the constructive comments of many users, the Handbook has become a collective work and has been translated into 15 languages.

During the past three decades the presentation and content of the Handbook have evolved, but its basic principles have remained the same: community-oriented education, directed at individuals and population groups and taking their health needs into account; learner-centred education, keeping the learners in an active situation and gradually helping them to become the architects of their own learning so that they become and remain competent for their professional role.

The application of these two principles has been particularly reinforced in this updated version. Relevance to the priority health needs of the population has been stressed in the first chapter. Problem-based learning has been described in some detail in the third chapter. Over 55 new pages and several new exercises have been added.

This Handbook is now entering a new phase. I am convinced that the time is ripe for the preparation of adaptations to national and to specific professional situations. The Handbook has hitherto aimed to address the needs of educators for the health professions in any part of the world equally well. But it is clear that health care and the services provided by health professionals of all kinds are strongly influenced by the specific local situation.

Adaptations of the Handbook can be made only through the initiatives and efforts of leading educators in the health professions in different countries. Several possibilities exist. The adaptation to a national, regional or other type of local situation could include maps, epidemiological, economic or other data, national health plans, etc., as well as exercises directly related to the specific local situation. Such an adaptation has recently been prepared in Spain. An adaptation for a given profession, e.g., nursing, nutrition, or social work, could contain exercises directly related to the specific profession, together with additional relevant information, as needed, all of which would form a supplement to the Handbook in its current form. Such an adaptation is now being planned in Italy for the nursing profession. The Nutrition Unit of WHO in Geneva has produced an adaptation of the Handbook for nutritionists. Anyone interested in such initiatives should write to the author, care of the Office of Publications, World Health Organization, 1211 Geneva 27, Switzerland.