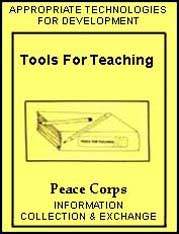 From the very beginning, the Visual Aids Workshop has been a cooperative venture. Its success has been due in large part to the unfailing faith, encouragement, and support given me by Dra. Arcelie de Guia-Llamado, Zambales' Assistant Provincial Health Officer in charge of Public Health, and Miss Alicia G. Clemente, Health Education Advisor for the Ministry of Health in Region III. The project was launched under the direction of Dr. Conrado C. Mariano, OIC of the Zambales Integrated Provincial Health Office until September 10, 1986, and continues under the direction of Dr. Bonifacio C. Punzalan, current OIC. I am deeply appreciative of the support offered me by both these gentlemen. Mrs. Aurora Alejandre Escusa, Provincial Health Educator and my counterpart in the Zambales Integrated Provincial Health Office, provided indispensable service in terms of negotiating schedules, purchasing supplies, and managing all the endless details that accompany setting up an extended workshop for the first time. Having actively participated as a learner in the first seminar, she also served as co-facilitator for the second ten-week session along with teacher par excellence Mrs. Gilda Danoco of President Ramon Magsaysay Memorial Hospital, another first session graduate. I would also like to acknowledge the always cheerful and dependable assistance with the silkscreening projects offered by Mr. Rey S. Ferrer, currently serving as Municipal Sanitary Inspector in San Marcelino.

A number of people have contributed to the reality of the completed curriculum and instruction manual. In particular I would like to thank Maja Cubarrubia, U.S. Peace Corps/Philippines, for authorizing support of the first draft. Thanks are also due to Waite Maclin, training director for U.S. Peace Corps/Philippines, for reading and commenting on the manuscript, and to Dave Wilder, editor of Salaysayan during 1986, for his thoughtful suggestions as well as for editing and proofreading the final draft. Portions of the material presented in the three instruction manuals that accompany the lesson plans have been adapted from Helping Health Workers Learn by David Werner and Bill Bower (Palo Alto: Hesperian Foundation 1982) and from Bridging the Cap: A Participatory Approach to Health and Nutrition Education (Westport, Connecticut: Save the Children 1982) and is so noted in the text. I am deeply indebted to both of these fine publications. Finally, I would like to express my most sincere appreciation to the Royal Netherlands Embassy in Manila for contributing the publication funds.