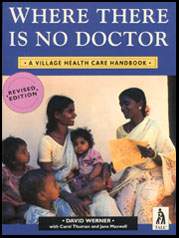 NOTE ABOUT THIS NEW EDITION

In this revised edition of Where There Is No Doctor, we have added new information and updated old information, based on the latest scientific knowledge. Health care specialists from many parts of the world have generously given advice and suggestions.

When it would fit without having to change page numbers, we have added new information to the main part of the book. (This way, the numbering stays the same, so that page references in our other books, such as Helping Health Workers Learn, will still be correct.)

The Blue Pages - a completely new section at the end of the book - has information about health problems of growing or special concern: AIDS, sores on the genitals, leishmaniasis, complications from abortion, guinea worm, and others. Here also are new topics such as measuring blood pressure, misuse of pesticides, drug addiction, and a method of caring for early and underweight babies.

New ideas and information can be found throughout the book - medical knowledge is always changing! For example:

· Nutrition advice has changed. Experts used to tell mothers to give children more foods rich in proteins. But it is now known that what most poorly nourished children need is more energy-rich foods. Many low-cost energy foods, especially grains, provide enough protein if the child eats enough of them. Finding ways to give enough energy foods is now emphasized, instead of the 'four food groups'. (See Chapter 11.)

· Advice for treatment of stomach ulcer is different nowadays. For years doctors recommended drinking lots of milk. But according to recent studies, it is better to drink lots of water, not milk.

· Knowledge about special drinks for diarrhea (oral rehydration therapy) has also changed. Not long ago experts thought that drinks made with sugar were best. But we now know that drinks made with cereals do more to prevent water loss, slow down diarrhea, and combat malnutrition than do sugar-based drinks or “ORS” packets.

· A section has been added on sterilizing equipment. This is important to prevent the spread of certain diseases, such as AIDS.

· See chapter 12 for details on building the fly-killing VIP latrine.

The Green Pages now include some additional medicines. This is because some diseases have become resistant to the medicines that were used in the past. So it is now harder to give simple medical advice for certain diseases - especially malaria, tuberculosis, typhoid, and sexually spread diseases. Often we give several possibilities for treatment. But for many infectious diseases you will need local advice about which medicines are available and effective in your area.

In updating the information on medicines, we mostly include only those on the World Health Organization's List of Essential Drugs. (However, we also discuss some widely used but dangerous medicines to give warnings and to discourage their use) In trying to cover health needs and variations in many parts of the world, we have listed more medicines than will be needed for any one area. To persons preparing adaptations of this book, we strongly suggest that the Green Pages be shortened and modified to meet the specific needs and treatment patterns in your country.

In this new edition of Where There Is No Doctor we continue to stress the value of traditional forms of healing, and have added some more “home remedies.” However, since many folk remedies depend on local plants and customs, we have added only a few which use commonly found items such as garlic. We hope those adapting this book will add home remedies useful to their area.

Community action is emphasized throughout this book. For example, today it is often not enough to explain to mothers that 'breast is best'. Communities must organize to make sure that mothers are able to breast feed their babies at work. Likewise, problems such as misuse of pesticides, drug abuse, and unsafe abortions are best solved by people working together to make their communities safer, healthier, and more fair.