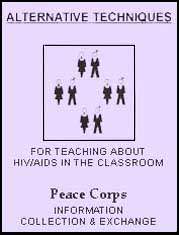 Objective:
· To help clarify the meaning of vocabulary

Target Group:
· Students at all levels

Directions:
· Participants are taught some simple motions which indicate "safe" or "risky" behavior, e.g. "Use a condom" the students can make the motion of tearing open a condom packet. This exercise is similar to giving participants random commands but the participants must react quickly and must not be tricked into obeying any direction not preceded by "Captain Condom commands..." For example, "Captain condom commands use a condom": all students must make the motion of opening a condom packet. "Use drugs", however, must not be obeyed. If the participant makes the motion indicating drug use, that participant is eliminated from the game. A discussion should follow after the game as to why students were eliminated from the game and the reasons that their behavior was risky.